At the conclusion of the research blitz panels, former U.S. Ambassador, Rich Verma, joined Penn's Jim McGann for a conversation about U.S.-India relations.

When Opposites Detract from Cross-Sector Collaboration: An Empirical Analysis of CSR Implementation after the 2013 Reform to the India Companies Act (with Christiane Bode, Imperial College London)
Aline Gatignon, Wharton

This paper examines under what conditions firms implement their corporate social responsibility (CSR) activities through nongovernmental organizations (NGOs) or on their own. We theorize that firms’ choices are driven by a combination of macro-institutional and firm-level considerations. We argue that corporations refrain from contracting with NGOs who specialize in the provision of social goods and are driven to internalize CSR implementation instead due to their concerns about the capability-based and legitimacy-based assets at stake across both levels of analysis. We find empirical support for these arguments, studying CSR projects implemented in India following the 2013 reform to the India Companies Act. Our findings advance research on CSR and nonmarket strategy, by contributing to our understanding of how macro-institutional factors can influence firms’ governance choices in transaction-cost analysis.

The Indian government seeks to digitize banking in rural areas, as an attempt to bring the entire country into the Digital Era. Increasing the use of cashless transactions in rural villages has the potential to alleviate cash-based crimes (e.g. bribes, robbery). Digital banking helps to create a safer space and more financial freedom within rural areas. In our research, we assess households utilizing the digitized banking opportunities that were presented previously to rural areas across the country. We compare households with access to cashless transactions to those in villages that do not have the same access. This research takes place in four states (i.e. Andhra Pradesh, Goa, Karnataka, & Tamil Nadu) in the southern region of India.

The Government of India has actively promoted bringing financial services to the unbanked in rural India since 1991. Of the many initiatives undertaken, the most popular and widespread initiative is the Self-Help Group (SHG) model, with approximately 7.9 million SHGs operating across India as of March 2016 (NABARD, 2017). This study addresses a gap in the literature by employing a multiple case study methodology to explore how the creation of self-help groups impact the formal labor market through ancillary job creation in the state of Karnataka.

The Safe Internet of Things
Rajeev Alur, School of Engineering and Applied Science

The Internet of Things (IoT) refers to the interconnection of computing devices embedded in both everyday objects (such as thermostats, fridges, and wearables) and in life-critical systems (such as medical device implants, connected transportation, industrial automation and the smart grid). IoT enriches our lives, but presents new challenges. Decisions made by these and other decision-making artificial intelligence systems should be seen to be fair, accountable, transparent, and ethical (fate). The fate of technology should be addressed in its design, by formally verifying these properties, and it should be monitored as the technology is deployed, using the data it generates.  Block chains are one promising approach for ensuring accountability and transparency. Through this project, Penn Engineering in partnership with leading institutions in India, are unpacking this area of rapidly growing interest by clustering project activities around three thrusts: research, online education, and innovation. Key activities of the project include an annual Penn Technology Innovation Summit.

Infrastructure of a Nation: Discourses of Connectivity in India
Revati Prasad, Annenberg School for Communication

Prasad’s dissertation examines efforts to increase internet connectivity in rural India in a bid to “connect the unconnected,” by focusing on the technopolitics and imaginaries underlying these efforts. When we say we are connecting the unconnected, what are we connecting them to? What are we connecting them for? The dissertation looks at national telecommunications policy debates, a state government’s infrastructure project, and a series of local networks run by small ISPs. Her talk will focus on the Andhra Pradesh State Fibernet Ltd, a state corporation that built a network of 24,000 km of aerial fiber and is now providing triple play services (internet, cable and phone) to over 600,000 subscribers mostly in rural Andhra Pradesh. Based on interviews with the leadership at APFiber, the cable operators who are building out the last mile connectivity and customers, Prasad explores the goals of the project analyzing the intersections between state and capital. She argues that the project aims to bring rural citizens into the digital economy, offering them to industry as consumers and potential gig workers and the connectivity on offer serves particular narratives of progress that further the penetration of state and capital in the lives of the putatively unconnected.

The Magic Bus Foundation's Adolescent Sports Program is attempting to develop skills and self-esteem, particularly for girls, through sports. This project is evaluating the effectiveness of the program. Dr. Sharon Ravitch and Dr. Jere Behrman will present their Provost-funded mixed-methods evaluation of the Magic Bus Program in India.

Social Determinants of OD in India
Peter McNally, School of Arts and Sciences

We have expanded our examination of the social determinants of open defecation in India. After analyzing social norms and social networks and how they contribute to Indian citizens' decisions to own and use toilets, we are presently rolling out an RCT to test means to increase toilet ownership and use in South India. At the same time that we conduct our baseline assessment of the RCT, we will also be rolling out a sociocentric network analysis of several target communities to better examine the role of social influence and ties in sanitation behaviors.

This presentation will describe an ongoing research project on household air pollution in India. The project explores the demand for clean cooking fuels in rural Tamil Nadu and inform government policies on fuel subsidies. The project is a new collaboration between the University of Pennsylvania and Sri Ramachandra Institute of Higher Education in Chennai.

We delivered a 3.5-day course on hand-on training on cardiac MRI toward increasing interpretative skills of local providers in March, 2019 at Sri Sathya Sai Institute of Higher Medical Education near Bangalore, India. During the course, we performed fast scanning of patients in 2 days in real-time and initiated research in rheumatic heart disease. Our goal is to increase utilization, interpretation skills, and level of research in cardiac imaging in India.

Trendsetters and Social Influence in the Swachh Bharat Mission
Raj Patel, School of Arts and Sciences

We have just conducted a qualitative analysis of trendsetters and social influence in the Swachh Bharat Mission to better understand its growth. In this research, we interviewed top politicians, heads of NGOs, leaders in the media, Bollywood stars, and local leaders and change agents. This research is a timely examination of the social factors that contributed to the growth of what is considered by some to be the 'largest behavior change initiative in history' as it comes to its close this October.

In its 2012 inscription of India’s Western Ghats as a World Heritage Monument, UNESCO noted the critical role of these uplands on the Indian monsoon system and the exceptionally high level of biological diversity of the region. At the same time, these diverse peninsular environments are also deeply humanized landscapes. South Indian natures and peoples are historically co-constituted, and a long history of human land use sets the stage for the diversity of languages, cultures, and livelihoods in the region today. In this interdisciplinary collaboration, we seek to better understanding of the interconnected relationships between human and natural histories, past and present. Research on the long-term, entwined histories of human land use, society, disease, population history, and patterns of biodiversity and vegetation structure will be critical for the ongoing projects of our partners, which are centered on issues such as forest-based livelihoods, conservation, and human health.

In this presentation, we will briefly outline the ongoing work we are conducting with colleagues at the Tata Institute of Social Science, IIT Mumbai, the School for Environment and Architecture, CAMP and Marine Life of Mumbai. Beginning with the provocation to rethink urban processes in Mumbai as in the sea and with wetness, our ongoing research examines how Mumbai’s monsoon terrain is being habited by humans and non humans in the Anthropocene.

This paper discusses recent data from an innovative experiment on declining female labor force participation in India. The presentation will also discuss other ongoing projects the Center for the Advanced Study of India (CASI) on agricultural markets and electoral politics.

Karapanagiotis’ work examines the ways in which devotional Hinduism is packaged and branded in various forms in order to be spread globally. Her presentation will focus on the efforts of one Hindu group – the International Society for Krishna Consciousness – and the divergent ways in which they package their Vaishnavism in India for a global audience.

Our project examines the comprehensive returns to migration for workers in India seeking jobs in the United Arab Emirates. This includes estimates of the gains in income, but also looks beyond income to consider quality of life, well-being and job amenities. We also adjust the financial gains to consider the costs of migration paid to labor intermediaries. 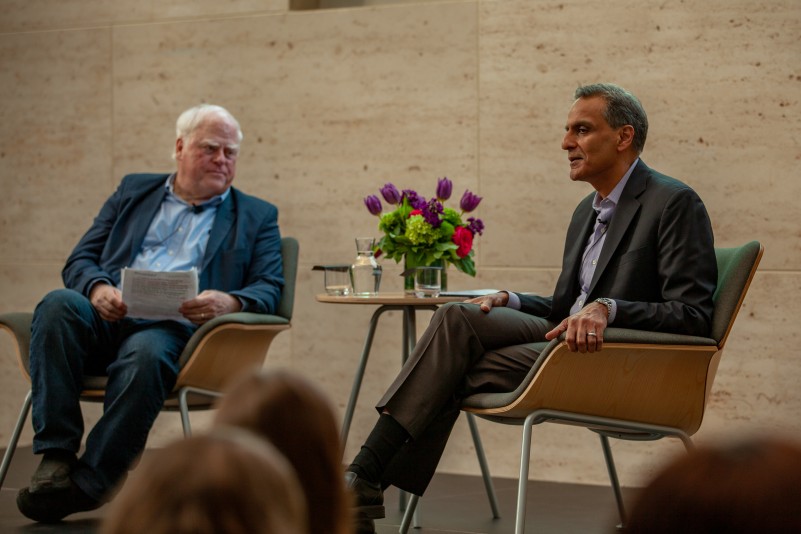 A daylong symposium highlighting Penn research in India wrapped up with a keynote conversation between the Lauder Institute’s Jim McGann and former U.S. Ambassador Richard Verma.