The Office of the Vice Provost for Global Initiatives has moved to remote work. The office will remain operational during regular business hours, Monday through Friday, 9:00 am-5:00 pm ET. For information on the operations of other Penn Global divisions, please check their websites.

For University updates on COVID-19... 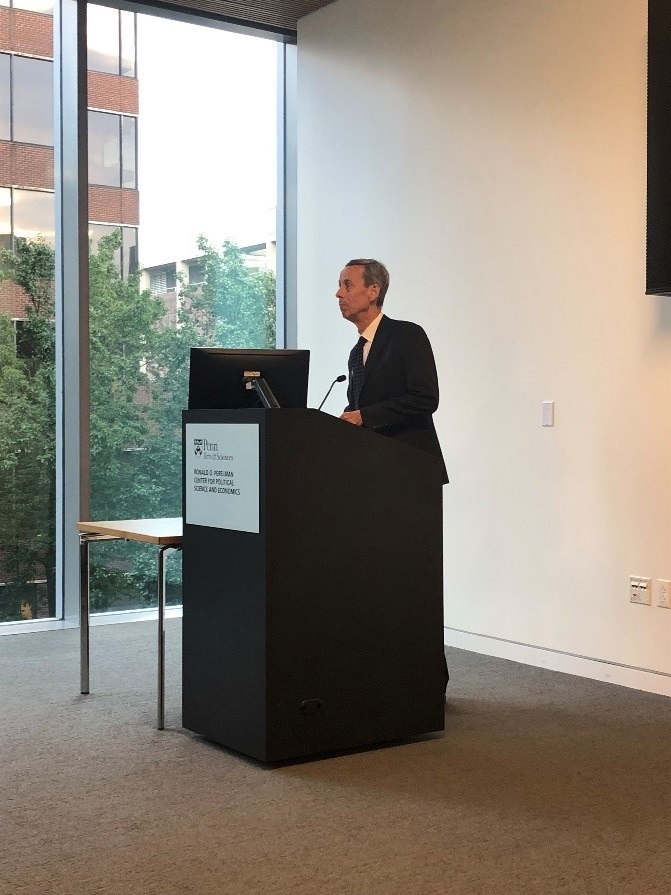 The Dialogues complement the Penn China Research and Engagement Fund and other Penn Global China initiatives in bringing the University community together to engage with issues of critical importance to the future of China and the world. The Dialogues are intended to be just that: catalysts for conversations that cut across disciplinary boundaries and will inform future research and teaching activities that strengthen Penn’s engagement with China. The Dialogues also aim to bring faculty, students, and staff from across the University together. Each event features an intimate, interdisciplinary lunch with Penn faculty, a public lecture, and small group meetings with students.

Amb. Allen’s visit focused on understanding the ongoing U.S. – China trade war. During a full day on campus, Amb. Allen met with faculty from across the University including Wharton School Dean Geoffrey Garrett, held small-group masterclasses with students from the Huntsman, Lauder, and International Relations programs, and delivered a public lecture. In his remarks, Amb. Allen emphasized that the trade war is about politics, not policy – in other words, domestic political considerations are driving trade policy on both sides of the Pacific. Amb. Allen also highlighted the dangers of China’s “techno-nationalist” economic policy on the one hand, and the United States’ increasingly reflexive anti-China sentiment on the other.

“We are headed,” Amb. Allen warned, “towards a lose-lose trade situation.” Amb. Allen urged both China and the United States to reject this zero-sum game, and instead “double down on openness” with each other.

The next Penn Global China Policy Dialogue will be held on Wednesday, November 13 and will feature journalist John Pomfret, author of The Beautiful Country and the Middle Kingdom: America and China, 1776 to the Present, who will examine the current state of U.S. – China tensions in historical perspective.

The Penn Global China Policy Dialogues are co-sponsored by the Center for the Study of Contemporary China, the Penn Wharton China Center, and the Center for East Asian Studies.