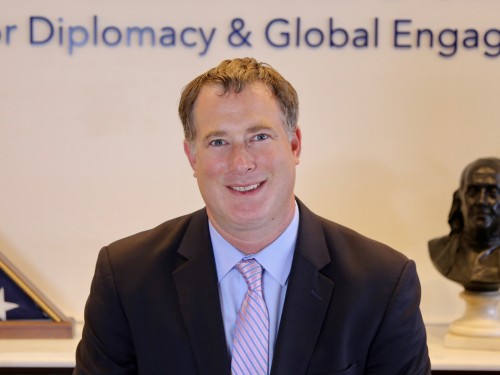 Daniel P. Erikson is a Senior Fellow at the Penn Biden Center for Diplomacy and Global Engagement. He served as Special Advisor to Vice President Biden at the White House from 2015 to 2017, and as Senior Congressional Advisor and Senior Policy Advisor at the U.S. Department of State from 2010 to 2015.

Erikson helped lead the Obama Administration’s efforts to secure $750 million in assistance for the Northern Triangle of Central America, and to deepen support for Colombia’s peace process. In 2015, Erikson was a member of the State Department negotiating team that re-established U.S.-Cuba diplomatic relations for the first time since 1961. In June 2017, he received the U.S. Department of State’s Superior Honor Award for his diplomatic contributions in Latin America.

Erikson is a Managing Director at Blue Star Strategies, a strategic advisory firm, and a member of the Council on Foreign Relations.  His past positions include program director and senior associate at the Inter-American Dialogue, professorial lecturer at Johns Hopkins-SAIS, Fulbright Fellow in Mexico, and research associate at Harvard Business School.

A widely published scholar, Erikson’s award-winning book, The Cuba Wars: Fidel Castro, the United States, and the Next Revolution, was described by Current History magazine as “the most important book on Cuba in a generation.”

Erikson earned a Masters in Public Policy from Harvard Kennedy School, as a Dean’s Fellow, and a B.A. from Brown University.

Medium - Amid Talk of a Wall, Mexico’s Icon of Resistance in DC Turns 50

Foreign Policy - Make the Summit of the Americas Great Again

Miami Herald - With Trump skipping the Summit, the stakes are even higher for the U.S.

The Dialogue - A Summit on the Brink: Trump in Latin America

AULA Blog - The Caribbean After the Hurricanes: What Path For Recovery?

The Cuba Wars: Fidel Castro, the United States, and the Next Revolution

Transforming Socialist Economies: Lessons for Cuba and Beyond