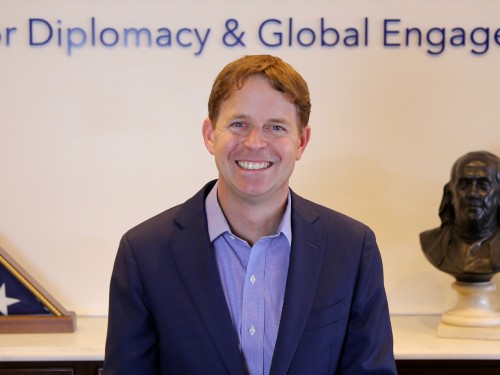 Jeffrey Prescott is a strategic consultant to the Penn Biden Center. Prescott served as Special Assistant to President Obama and Senior Director for Iran, Iraq, Syria, and the Gulf States on the National Security Council. He joined the Obama Administration in 2010 as a White House Fellow, serving as Vice President Biden's Deputy National Security Advisor and senior Asia advisor.  He is a member of the Council on Foreign Relations.

Prior to the White House, Prescott was a Senior Research Scholar and Lecturer in Law at Yale Law School and Deputy Director of Yale’s China Center.  He founded and directed the Yale Center’s Beijing office in 2002 and was a Visiting Scholar at Peking University Law School.  As a Luce Scholar in 2001, he was a visiting professor at Fudan University in Shanghai.

Previously, Prescott was a Bernstein Fellow and staff attorney at the Lawyers Committee on Human Rights (now Human Rights First), where he helped establish a rights defenders program to protect lawyers and activists at risk around the world. He also served as law clerk to the Hon. Walter K. Stapleton, U.S. Court of Appeals for the Third Circuit.

Prescott is a graduate of Boston University and Yale Law School.

Foreign Policy - Here's What the Senate Should Ask Mike Pompeo

Foreign Policy - Why Abandoning Paris Is a Disaster for America

Foreign Policy - Dear Senators: Push Back Against Iran, but Not at the Expense of the Iran Nuclear Deal

Foreign Policy - Will Trump Scuttle the Success of Retaking Mosul?

Foreign Policy - What to Watch Out for, Mr. President