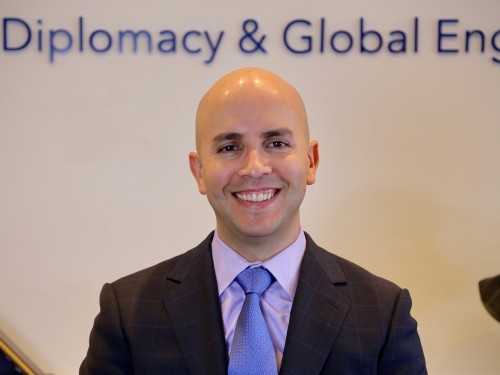 Juan S. Gonzalez is a Senior Fellow at the Penn Biden Center for Global Diplomacy and Global Engagement.

Mr. Gonzalez previously served as Deputy Assistant Secretary of State for Western Hemisphere Affairs, where he led U.S. diplomatic engagement in Central America and the Caribbean. From 2013 to 2015, he served as Special Advisor to Vice President Joe Biden, during which he accompanied the Vice President on seven visits to Latin America and coordinated the launch of the U.S.-Mexico High-Level Economic Dialogue, the Caribbean Energy Security Initiative, and the Alliance for Prosperity in the Northern Triangle of Central America. Mr. Gonzalez was also National Security Council Director for Western Hemisphere Affairs from 2011 to 2013. Prior to the White House, Mr. Gonzalez served in a variety of positions at the State Department’s Bureau of Western Hemisphere Affairs, including Chief of Staff to Assistant Secretary of State Arturo Valenzuela. From 2001-2001, he served as a Peace Corps Volunteer in Guatemala.

In 2017, Mr. Gonzalez was appointed by Senator Chuck Schumer to serve on the Western Hemisphere Drug Policy Commission. He is also a Term Member of the Council on Foreign Relations, a board member of the Washington Office on Latin America, and a member of the Advisory Board of Foreign Policy for America.

Mr. Gonzalez has an M.A. from Georgetown University’s Edmund A. Walsh School of Foreign Service, where he is currently adjunct faculty in the Center for Latin American Studies. He is a native of Cartagena, Colombia and is married to Sarah Ashley Platts.

Americas Quarterly – Why Ambassador Feeley’s Resignation is So Devastating

Foreign Policy – Tillerson’s Diplomatic Approach in Venezuela is Paying Off