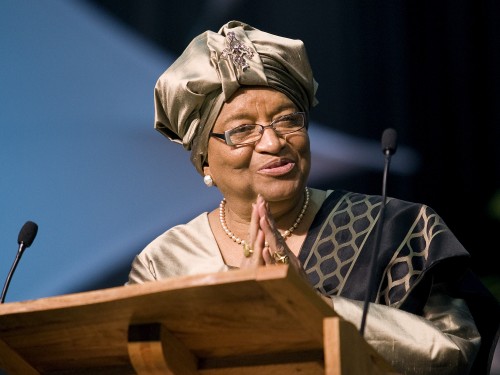 Known as "Africa's Iron Lady," former President of the Republic of Liberia and Nobel Peace Laureate Ellen Johnson Sirleaf won international acclaim for leading Liberia through the Ebola crisis and through reconciliation and recovery following her nation's decade-long civil war. As Africa's first democratically elected female head of state and Liberia's first female president, she is credited with achieving dramatic economic, social, and political change, culminating in Liberia’s first peaceful and democratic transfer of power in 73 years. On stepping down from the presidency in 2018, she became the first woman honored with the Mo Ibrahim Prize, considered the most prestigious award for African leaders.  In addition, she was invited to join The Elders, an organization founded by Nelson Mandela and Desmond Tutu. She remains a leading promoter of freedom, peace, justice, women’s rights, and democratic rule within the international community.