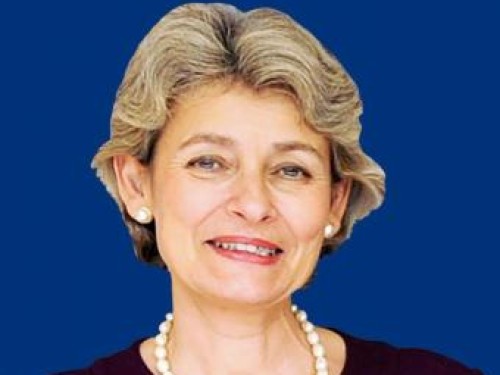 Irina Bokova served as the Director-General of UNESCO between November 2009 and November 2017. She is the first woman and the first Eastern European to lead the Organization.

Having graduated from Moscow State Institute of International Relations, Irina Bokova was a Fellow at the University of Maryland (Washington) and followed an executive program at the John F. Kennedy School of Government (Harvard University). She began her career at the United Nations Department at the Ministry of Foreign Affairs of Bulgaria. Appointed in charge of political and legal affairs at the Permanent Mission of Bulgaria to the United Nations in New York, she was a member of the Bulgarian Delegation to the UN World Conferences on Women in Copenhagen, Nairobi and Beijing. She was elected twice as Member of Parliament and she served as the Government's first Secretary of European integration.

Irina Bokova was acting-Minister for Foreign Affairs, as well as Ambassador of Bulgaria to France, Monaco and UNESCO and Personal Representative of the President of the Republic of Bulgaria to the Organisation Internationale de la Francophonie.

As Director-General of UNESCO, Irina Bokova actively engaged in international efforts to advance quality education for all, gender equality, the protection of the world’s cultural heritage as a humanitarian imperative and security issue to strengthen the foundations for lasting peace. She actively promoted culture as a driver for development, along with science diplomacy and cooperation.