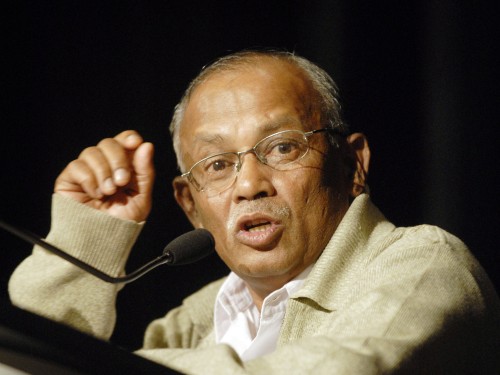 Jockin Arputham is president of Shack/Slum Dwellers International (SDI), and president of the National Slum Dwellers Federation in India.  Launched in 1996, SDI is a network of community-based organizations of the urban poor in 33 countries in Africa, Asia, and Latin America.  Arputham has worked for more than 40 years in slums and shanty towns, building representative organizations into powerful partners with governments and international agencies for the betterment of urban living. Arputham was the winner of the 2000 Ramon Magsaysay Award for Peace and International Understanding and an honorary Ph.D. from KIIT University, Bhubaneswar, India, in 2009.  In 2011, the Government of India bestowed on him its fourth highest civilian honor, the Padma Shri award.

Perry World House was saddened to learn the news that SDI president Jockin Arputham passed away in India on Saturday, October 13, 2018, at the age of 71. Arputham shaped and informed our work in urban areas, and he will be missed by all of us, especially by those who worked closely with him during his fellowship.