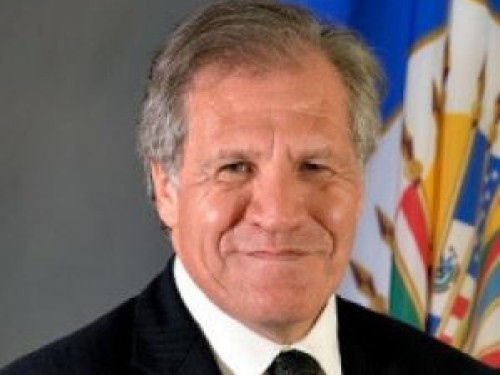 Luis Almagro Lemes is the Secretary General of the Organization of American States (OAS), one of the world’s oldest regional organizations.  As Secretary General, Almagro has been committed to guaranteeing “more rights for more people,” guiding the Organization to meet new realities in the Hemisphere, and striving to ensure more democracy, human rights, security and prosperity for all.  A career diplomat, Almagro has previously served as Uruguay’s Foreign Minister from 2010-2015, a Senator in the country’s General Assembly, an Ambassador to China, and a senior diplomat in Uruguay’s foreign ministry including its embassies in Germany and Iran. As Foreign Minister for President José Mujíca, he defined several emblematic initiatives that put his country on the global map, from receiving former prisoners from Guantanamo, to welcoming dozens of Syrian families who had been victims of the country´s conflict, to building support in the United Nations so that, beginning in 2016, Uruguay could become part of the Security Council. In 2014 Foreign Policy magazine named him a Leading Global Thinker, one of ten decision-makers in the world who have been granted this international distinction. Secretary General Almagro, a lawyer by profession, is married and has seven children. In addition to Spanish, he speaks English and French.