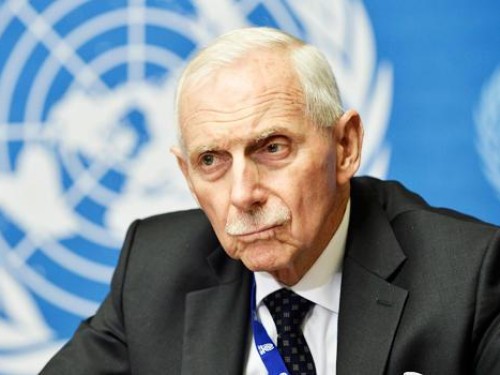 Ambassador William Lacy Swing has served as an American and United Nations diplomat for half a century. He was Ambassador to six countries – South Africa, the Democratic Republic of the Congo (DRC), Nigeria, Liberia, the Republic of the Congo, and Haiti – under four U.S. Presidents. Upon completion of his US diplomatic career in 2001, Swing then served in senior United Nations positions for seventeen years. From 2003 to 2008, he was Special Representative of the Secretary-General (SRSG) and Chief of the UN Peacekeeping Mission in the Democratic Republic of the Congo —the largest peacekeeping operation in UN history. Earlier, he was SRSG and Chief of Mission in Western Sahara (MINURSO), from 2001 to 2003. Swing was elected in 2008 to be Director General of the International Organization for Migration (IOM) and re-elected in 2013, completing his second term in 2018. Under his ten-year leadership, IOM expanded its membership and global footprint and became a United Nations Agency in 2016. Swing has been recognized by several foreign governments, including France, Japan, and Germany, and has also received several  U.S. government awards, including the Presidential Certificate of Commendation and Distinguished Service, and Superior and Meritorious honor awards; and the Secretary of State’s Distinguished Service and Valor Awards.  He received his B.D. from Yale University, and completed postgraduate studies at Tübingen University in Germany.