A Partnership between Freedom House, the George W. Bush Institute and the Penn Biden Center The Democracy Project

Reversing A Crisis of Confidence

Even as Americans remain committed to the ideals of democracy, a majority see democracy in the United States as weak and getting weaker, according to a national survey jointly commissioned by Freedom House, the George W. Bush Institute, and the Penn Biden Center for Diplomacy and Global Engagement. With democracy and democratic institutions under attack globally, the three organizations engaged two polling firms, one Democratic and one Republican, to survey Americans’ attitudes about democratic principles and institutions at home and support for U.S. policies that advance democracy abroad.

What do Americans think about our democracy today?

The survey found that a clear majority—55 percent—see American democracy as “weak,” and 68 percent believe it is “getting weaker.” These statements drew majority support among all races, genders, age groups, levels of education, income brackets, and political parties, indicating that such concerns go well beyond personal party preference.

A narrow majority (50–43 percent) agreed that America is in “real danger of becoming a nondemocratic, authoritarian country,” a concern significantly greater among nonwhite women (62 percent). Certain groups that perceive less benefit from living in a democracy, especially racial minorities and women, are notably less convinced of the merits of the democratic system, which was found across multiple issues raised in the survey.

The poll and accompanying focus groups suggest that Americans’ frustrations with the health of their democracy are rooted in diverse and long-standing problems, especially perceptions of racism and discrimination and the role of big money in politics.

“We’re grateful to launch this major public opinion research study in collaboration with Freedom House and the Penn Biden Center for Diplomacy and Global Engagement,” President George W. Bush said. “Like our partners, the Bush Institute is proud to create a resource for others who share our commitment to democracy and freedom. We hope this work can be a step toward restoring faith in democracy and democratic institutions.”

We hope this work can be a step toward restoring faith in democracy and democratic institutions.
President George W. Bush

“The findings of the Democracy Project confirm we can’t take our freedoms for granted—we have to work for them, and we have to defend them,” former Vice President Biden said. “It’s also a reminder that our democracy has never been perfect, and we can’t be complacent if we hope to continue to lead in the 21st century. By identifying key challenges, we can keep working—Democrats and Republicans, together—to strengthen and reinforce the values that form the foundations of our democracy.”

The findings of the Democracy Project confirm we can’t take our freedoms for granted—we have to work for them, and we have to defend them.
Vice President Joe Biden

“Americans are deeply worried about the health of their democracy and want to make it stronger,” said Michael J. Abramowitz, president of Freedom House. “There appears to be a crisis in confidence in the functioning of our democracy, and it is not a party-line issue. Intense concern about the health of democracy spans Republicans, Democrats, and independents; voters and nonvoters; the young, middle-aged, and older Americans; and people of every race and background.” 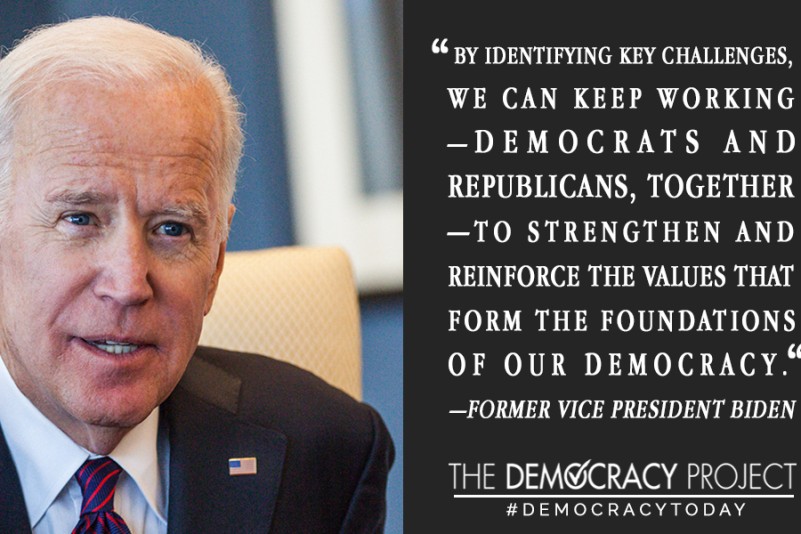 The American public’s support for the concept of democracy remains strong and expansive. In contrast to the period before World War II, when the appeal of fascism and communism was spreading through Europe and the United States, there is no evidence in the current research of a recent decline in support for the idea of democracy. A full 60 percent of respondents believe that it is “absolutely important” to live in a democracy, rating it at 10 on a 1–10 scale. In total, a large majority of 84 percent rated the importance at between 6 and 10.

Certain groups that may perceive less benefit from the current system—notably nonwhite Americans—are less convinced of the importance of living in a democracy. While 60 percent of respondents overall said living in a democracy is “absolutely important,” the figure was 54 percent for nonwhite respondents and 64 percent for their white counterparts. Fewer than half of nonwhite respondents (42 percent) said they were satisfied with “the way democracy is working in our country,” compared with 51 percent of white participants.

Young adults feel less strongly about the importance of democracy than respondents over age 29. While 81 percent of the younger participants gave the importance of living in a democracy a rating of between 6 and 10 on a 10-point scale, only slightly less than the public overall, just 39 percent gave it the maximum rating of “absolutely important”—far below the 60 percent figure for respondents as a whole. However, past studies that followed subjects over a long period of time have found that people tend to develop stronger support for living in a democracy as they age.

Americans are frustrated with racism and discrimination and the corrosive influence of money in politics. The survey presented a list of issues and asked respondents to choose the two that are most concerning to them when it comes to democracy in America. The most frequently selected topics were “big money in politics” and “racism and discrimination.”

The researchers tested messages and actions that may be used to galvanize support for democracy. The advocacy message that resonated the most featured both a warning and a call to action. Respondents reported feeling more favorable toward the American democratic system after hearing a message that promoted civic engagement as a means of preventing their freedoms and rights from being “whittled away.”

A majority of Americans support the idea that democracy and human rights should play a role in U.S. foreign policy. Overall, 71 percent of the public favor “the U.S. government taking steps to support democracy and human rights in other countries.” When presented with arguments for and against such support, respondents signaled much stronger agreement with the former than the latter. The moral argument seems to be the most persuasive: A 91 percent majority agree that “we can’t control what happens in the world, but we have a moral obligation to speak up and do what we can when people are victims of genocide, violence, and severe human rights abuses.” An 84 percent majority agrees that “when other countries become democratic, it contributes to our own well-being.” And a 67–22 percent majority believes that “when other countries are democratic, rather than dictatorships, it often helps make the U.S. a little safer”—rejecting the alternative statement that “there is no impact on US security when other countries move away from dictatorship and become democracies.

The findings are drawn from 10 focus groups conducted with different segments of the American public in Arizona, Indiana, Missouri, North Carolina, and Pennsylvania between March 12 and April 18, 2018, and from a nationwide telephone survey of 1,400 adults, conducted between April 28 and May 8, 2018. The margin of sampling error on the random survey of 1,400 respondents is +/-2.6 percent. (For more on the methodology, visit the Report page).

The Democracy Project survey was designed and conducted by Greenberg Quinlan Rosner, a Democratic polling firm, and North Star, a Republican polling firm. The research received generous support from the Knight Foundation.

About the John S. and James L. Knight Foundation

Knight Foundation is a national foundation with strong local roots. We invest in journalism, in the arts, and in the success of cities where brothers John S. and James L. Knight once published newspapers. Our goal is to foster informed and engaged communities, which we believe are essential for a healthy democracy.

The Penn Biden Center for Diplomacy and Global Engagement at the University of Pennsylvania is founded on the principle that a democratic, open, secure, tolerant, and interconnected world benefits all Americans.

Inspired by the Democracy Project, students from the University of Pennsylvania School of Design transformed key elements from the report into art. As their final project, they visualized the action-oriented messages that the Democracy Project tested to help galvanize support for democracy. These artists include Bei Zhang, Chuqi Liu, Elena Ruyter, Isabella Losada, Jason Barr, Jinah Oh, Justin Swirbul, Sofie Praestgaard, and Stara Wright. Read in their own words about the artwork they created by visiting @PennBiden on Twitter. To learn more about the Democracy Project findings, visit democracyprojectreport.org. 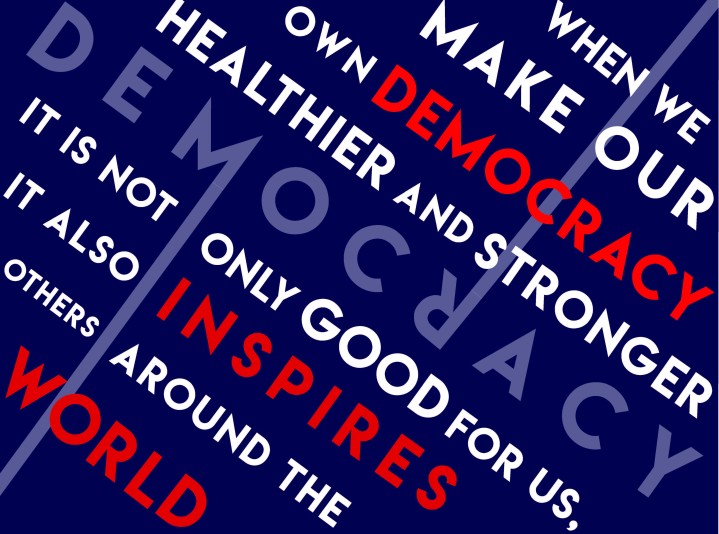