The Penn Biden Center for Diplomacy and Global Engagement at the University of Pennsylvania is founded on the principle that a democratic, open, secure, tolerant, and interconnected world benefits all Americans. Based in our nation’s capital, the Penn Biden Center engages more of our fellow citizens in shaping this world, while ensuring the gains of global engagement are widely shared.

U.S. leadership has sustained an open world for more than 70 years, enabling virtually every advantage we enjoy as Americans and helping to ensure our safety, our prosperity, and our way of life. Comprised of common norms, rules, and institutions, the American-led liberal international order has facilitated the free movement of people, goods, ideas, and capital; protected the sovereignty and self-determination of nations; and promoted basic human rights and fundamental freedoms for all peoples.

The Penn Biden Center engages Penn’s students and partners with its faculty and global centers to convene world leaders, develop and advance smart policy, and strengthen the national debate for continued American global leadership in the 21st century.

Today, this order is under threat. It is being challenged by authoritarians and extremists and strained by the pace, scope, and disruptive nature of global change. It is in our interest as Americans to defend the liberal international order, even as we work to improve it to better reflect the times in which we live and address the new challenges we face.

The Penn Biden Center engages Penn’s students and partners with its faculty and global centers to convene world leaders, develop and advance smart policy, and strengthen the national debate for continued American global leadership in the 21st century.

Throughout his decades of public service, the Center’s namesake, Joseph R. Biden, Jr., has fought to secure American global leadership by defending and advancing a liberal international order. The Center will bring President Biden's lifelong commitment to public service to its every endeavor. 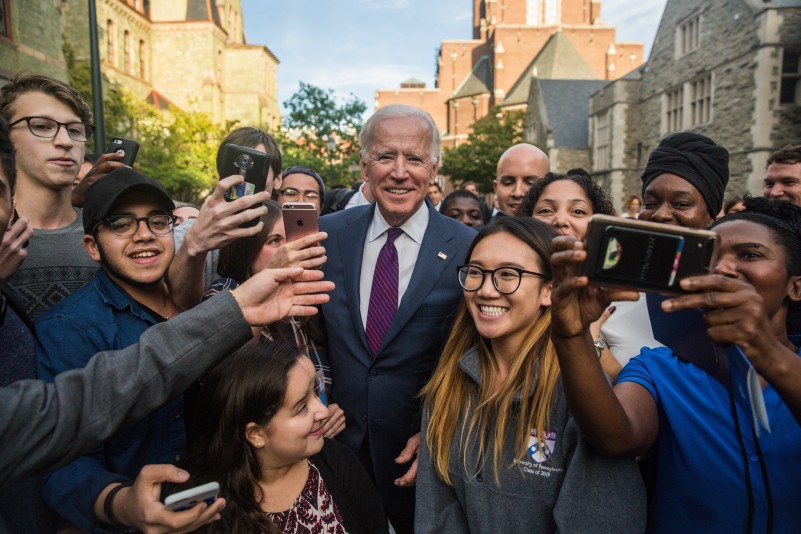 About Our Namesake - Joe Biden

Joseph Robinette Biden, Jr., represented Delaware for 36 years in the U.S. Senate before becoming the 47th Vice President and the 46th President of the United States.

Joseph Robinette Biden, Jr., was born November 20, 1942, in Scranton, Pennsylvania, the first of four siblings. In 1953, the Biden family moved from Pennsylvania to Claymont, Delaware. He graduated from the University of Delaware and Syracuse Law School and served on the New Castle County Council. Then, at age 29, he became one of the youngest people ever elected to the United States Senate.

Just weeks after the election, tragedy struck the Biden family when then Senator-elect Biden's wife, Neilia, and their one-year-old daughter, Naomi, died and his 2 sons were injured in an auto accident. Joe Biden was sworn into the U.S. Senate at his sons' hospital bedside and began commuting to Washington every day by train, a practice he maintained throughout his career in the Senate.

In 1977, President Biden married Jill Jacobs. Jill Biden, who holds a Doctorate in Education, is a life-long educator and currently teaches at a community college in Northern Virginia. The President’s son, Beau, was Delaware's Attorney General from 2007-2015 and a Major in the 261st Signal Brigade of the Delaware National Guard. He was deployed to Iraq in 2008-2009. Beau passed away in 2015 after battling brain cancer with the same integrity, courage, and strength he demonstrated every day of his life. The President’s second son, Hunter, is an attorney. His daughter Ashley is a social worker and Executive Director of the Delaware Center for Justice. President Biden has five grandchildren: Naomi, Finnegan, Roberta Mabel ("Maisy"), Natalie, and Robert Hunter.

As a Senator from Delaware for 36 years, President Biden established himself as a leader in facing some of our nation's most important domestic and international challenges. As Chairman or Ranking Member of the Senate Judiciary Committee for 17 years, then-Senator Biden was widely recognized for his work on criminal justice issues, including the landmark 1994 Crime Act and the Violence Against Women Act. As Chairman or Ranking Member of the Senate Foreign Relations Committee for 12 years, then-Senator Biden played a pivotal role in shaping U.S. foreign policy. He has been at the forefront of issues and legislation related to terrorism, weapons of mass destruction, post-Cold War Europe, the Middle East, and Southwest Asia.

As the 47th Vice President of the United States, Joe Biden continued his leadership on important issues facing the nation and represented America abroad, traveling over 1.2 million miles to more than 50 countries. As Vice President, Biden convened sessions of the President’s Cabinet, led interagency efforts, and worked with Congress in his fight to raise the living standards of middle class Americans, reduce gun violence, address violence against women, and end cancer as we know it. After leaving the White House, Joe Biden continued his legacy of expanding opportunity for all, both in the United States and abroad, with the creation of the Biden Foundation, the Biden Cancer Initiative, the Penn Biden Center for Diplomacy and Global Engagement at the University of Pennsylvania, and the Biden Institute at the University of Delaware.

Now, as America’s 46th President sworn in on January 20, 2021, Joe Biden will lead the United States into the third decade of the 21st century based on the principles and values he has espoused throughout his career. The Penn Biden Center will carry on its mission of conducting original research, analysis, and commentary on America’s place in the world and the global forces that impact our national security, democratic institutions, and foreign policy. As a research unit within the University of Pennsylvania, the Penn Biden Center will remain completely independent of the Biden administration, and the analysis and opinions of its staff and affiliated scholars will reflect their personal views alone, and not necessarily those of the University of Pennsylvania. The Penn Biden Center does not accept any contributions or gifts.