With the last name Sullivan, it is pretty clear I have some Irish ancestry. Besides listening to Celtic Woman and going to Irish shows every once in a while, though, I never had much of a connection to my Irish roots growing up.  They were never really something I could personally connect to or call my own. That all changed during my time in Ireland.

When my dad found out I would be going on this trip, it sparked him to do genealogical research. Right before I left, he sat down with me and showed me the census records of my great grandparents and their children. It was the 1901 census, recorded just before they left Ireland to escape poverty and hunger in hopes of a better life in America. I now could put some names to my Irish ancestors and discovered that they were from southwestern Cork, a county in the Republic of Ireland. I was a bit closer to connecting with my relatives but not by much.

Then my dad found out about the Driscolls. My nana’s maiden name was Driscoll, so I am part Driscoll and part Sullivan. Somehow my dad found out that the Driscoll “clan” has a family reunion and clan meeting every year in the summertime. And it just happened to be the weekend of June 26th, right in the middle of my time in Ireland.

I was a bit skeptical about meeting a bunch of strangers from our family “clan.” My dad, on the other hand, immediately booked flights for him and my mom to visit Ireland and was determined to make his way to Cork for the reunion.

When my parents arrived in Ireland, we made the trek down to County Cork on windy tiny roads and arrived at Ard na Graine, our Bed and Breakfast for the weekend, which was situated on a farm that stretched as far as the eye could see with green pastures. While I could talk about our Bed and Breakfast’s quaint and peaceful atmosphere, their charming Irish hospitality and their scones (freshly baked every morning and to die for!) for hours, the real story here is about our adventure in Baltimore the next few days.

Baltimore is a small fishing village along the southwestern coast of Ireland. We pulled into town Friday night and eventually resorted to going to the pub, the hub of village activity and hopefully information since no signs or people greeted us for the family reunion. We mentioned to the bartender that we were here for a family reunion and asked, had he heard of it? The Driscolls? We hadn’t connected with anyone at the event beforehand so all we knew was from a Facebook group online. The bartender responded with an, of course, they’re all down there. The Driscolls were a big deal around here, he said. They just got back from the castle and we’re heading to dinner at the boathouse. We quickly headed out and walked straight into the beginning of my deeper connection with my Irish roots and ancestry.

We got in line, not knowing anyone around us, but quickly started chatting with a few people. One couple was from California, another was from 30 minutes away from my family in Massachusetts. We made small talk in line until getting our meals. Then we sat down with a bunch of strangers who would become our closest friends during the weekend.

The people, the new family, we met were from all over the world- from Ireland, from states all around the US, from the UK, from Australia, New Zealand. I won’t try to put into words just how special it was to meet and connect with all of these people, but it is truly something I will never forget. I now not only have a connection to the country of Ireland, the place my ancestors lived, and the history of their times, but also to family today who instill a sense of pride and connection to being Irish and to being a Driscoll.

Outside of meeting such wonderful people, our Driscoll clan reunion consisted of dinner Friday and then a ferry ride to Cape Clear, a tiny island off the southern coast of Ireland, on Saturday morning. Here we made our way to the Driscoll family heritage center (who knew we had one of those!) where they held a candle lighting and memorial service for all of the Driscolls and O’Driscolls that had been lost over the years. There was Driscoll trivia and an island walk and a Driscoll book launch. It was all more than I could have imagined and only made possible because I was in Ireland with GRIP for the summer. We took a ferry back to Baltimore and had dinner with our new family. The night concluded with a live band in the town square and lots of dancing.

We didn’t know how to do the Irish jig before that night and we still don’t know how to do it now. But we tried (and probably failed) and had so much fun. Even though we probably looked crazy trying it, it didn’t matter. Because we were among family. A family I never thought I would have, let alone meet, but thanks to my time in Ireland and this Driscoll clan reunion, I can now call my own. 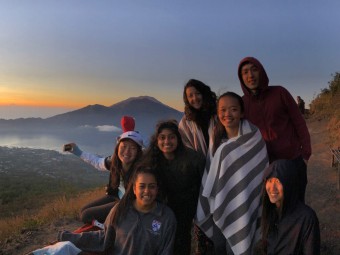