Samuel (front row, second from right) at the Wharton Ideathon with organizers, speakers, and participants

Samuel Oyewusi is an exchange student coming to Penn from the University of St. Andrews in St. Andrews, Scotland. Samuel is studying at The College of Arts & Sciences for the 2019-2020 academic year. We sat down with Samuel to learn more about him and his exchange experience so far.

Now that you’ve been at Penn for a semester and a half, how has this semester been different compared to last semester?

I feel a lot more settled, and it’s been easier to adjust to a schedule. However, a lot of my exchange student friends from last semester have left, so I’ve been forced to expand my social circle and meet new people.

One way that I do that is through the St. Andrew’s Society, which is a scholarship organization based in Philadelphia that aims to encourage exchanges between the US and Scotland. They select students attending universities throughout Pennsylvania and beyond to study in Scotland, and students from Scotland like me to come study in the US They’ve taken me to amazing events and dinners around Philadelphia.

I’ve also been involved at the club Nigerians at Penn, which has been very influential in my social life. They have a wide range of events, including most recently, a competition called Calabash. The groups Nigerians at Penn and Caribbeans at Penn would compete against each other by performing on stage for a prize. I break danced and actually won the competition!

That’s awesome! That’s great that you were able to put yourself out there and surprise people a bit.

Right, I think being at Penn has taught me that small experiences are really important. Sometimes it’s easy to assume that something small like a Quiz Night might not make much of a difference to the exchange experience, but the benefit of doing those things is actually greater than one might imagine or expect.

A good example of this is the Wharton Ideathon in January, where students formed teams and solved challenges for a business over a 24-hour period to win a cash prize. This year, the business we worked with was Ralph Lauren. At first, I was hesitant to join the competition, but I followed my friends and signed up and I’m so glad I did. While we didn’t win, I still enjoyed the experience a lot. I met so many new people, learned to work with my team closely, and learned how people approached problems. So to other students, I would say to not discount anything and say yes to attending events and going on trips.

How have academics at Penn been for you?

Classes are quite intense. I’m an Economics major so all of the classes I’ve taken are related to economics. I’m taking Econometrics and it’s one of the most challenging classes I’m taking. I think that I’m doing the same amount of work compared to back in St. Andrews though, it’s just that I’m constantly assessed here so I have to make sure you’re on top of things all the time. It can be hard to catch up if you fall behind at a certain point or with a certain topic.

How do you manage stress at Penn?

Penn is filled with hard-working people who have clear goals and aims. Seeing the extent to which people, especially fellow Africans and Nigerians, are willing to put in the time and effort to achieve what they want is something I’m taking away.

At the same time, however, I can see how Penn’s pre-professional culture can get to people and stress people out. I also felt some anxiety around it. But ultimately, especially coming from Scotland which is much more relaxed, I also realize that it’s only stressful if you allow it to be to an extent. It’s easy to get caught up in future plans but ultimately I just tell myself to just calm down and relax.

Since you mentioned St. Andrews early, what would you say are some of the best things about Scotland?

Scotland has some of the best universities and you can find excellent courses in anything from sustainability to finance to computer science. Scotland is also much more relaxed and you’ll have a wholesome experience. It’s an excellent location if you want to go traveling within the country or around Europe. People like to go climbing on mountains or skiing. I would also saw that there’s much more of a balance in Scotland. I feel like the US, and Penn in particular, emphasizes work so much. In Scotland, there’s time for everything.

The University of St. Andrews is very international, about 50 percent of students are international, a lot of them are Americans. While there are no clubs at St. Andrews, we have really big university-wide events that are open to any students to attend.

Are you excited to go back to Scotland?

I’m excited to go back, but I’m also excited for the time I’ve had here. While I love Scotland, it’s nice to be in a place that has buildings that are taller than four or five stories. Philly as a city particularly values innovation and entrepreneurship, which has added so much to my experiences. For example, I attended a city-wide festival about innovation called B.PHL. There were students from universities across Philly, as well as professionals and business leaders in attendance. I even saw my favorite band, Questlove from The Roots, which is a hip hop band from Philadelphia!

I would like to work at a tech startup, which is why I came to study in the US in the first place. There’s a lot more drive for it here than there is back home. So hopefully, I’ll get to return to the US again in the future and work in the startup field! 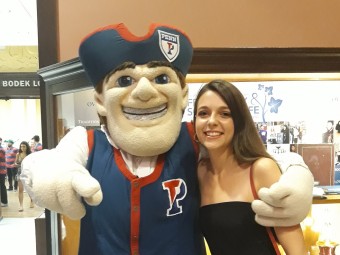 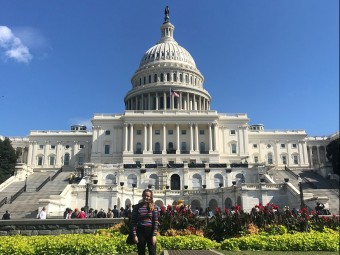 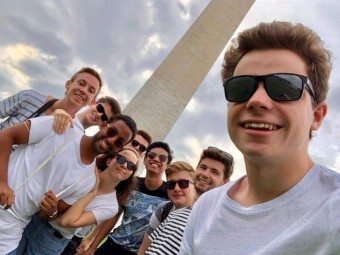