Christine at the Royal National Park

It’s been a little over a month since I arrived in Sydney, and it still feels like there is so much of the city that I have not yet explored. My to-do list of the places I want to visit, whether it be museums or restaurants or tourist attractions, seems endless, and I’m always planning new places to visit and explore. Despite all my careful planning, some of my favorite memories and places that I’ve visited have been the result of spontaneous decisions. One of my most memorable experiences so far has been visiting the beautiful Royal National Park.

Originally, my classmate and fellow GRIP intern Sriya and I had planned to visit the Blue Mountains, a very popular tourist destination. Even though there are so many things to do inside Sydney, we wanted to explore the areas around the city as well. Moreover, there are extensive guides and tours online about the Blue Mountains, making it easy for us to plan our trip and figure out where we need to go. Earlier that week, I had excitedly planned out our entire day from start to finish.

However, at 11 PM, the day before we were supposed to go to the Blue Mountains, I received a call from Sriya, who told me that she had just found out that the train going from the city to the mountains had been closed due to the weather. It was too late to book a tour, and we had no other way of getting to the mountains. Resigned, we started looking for other potential options for places to visit, which is when we first stumbled on the idea of going to the Royal National Park.

Despite it being a national park, I had not heard much about the Royal National Park before–it didn’t rank highly on any of the top “Things to Do in Sydney” lists, and I hadn’t heard any recommendations to visit it by people I’d met in Australia either. It seemed to be a less popular tourist destination, judging from the lack of tours and written guides available. Up until this point, I had been relying heavily on recommendations and online reviews to decide on where to visit. As a result, I was originally a bit hesitant even to try to go.

However, I soon realized that the park was much easier to get to than I had expected. With the park having multiple entrances and different hiking trails of varying distances, I quickly narrowed our options down to something that could be completed within a day. Bit by bit, I began to piece an itinerary together, looking into the train and ferry routes necessary to get to the Royal National Park.

The moment the trail brought us next to the water, I was instantly amazed. The scenery from the trail was one of the most breathtaking views I had ever seen, made even better by the fact that this was the first sunny day we had had following a week-long period of rain. As I stopped to admire the expanse of patterned stones before us and the sprawling sea beyond it, I instantly felt my mind at peace. The rest of the trail, from the beaches to stone structures, was just as pretty as the beginning. Our walk took us through bushy flora and sandy boardwalks, with the ocean in the background the entire time. We passed by the Wedding Cake Rock, a flat polished sandstone cube protruding out of a cliffside, and ventured down the shore to Marley Beach, a secluded and expansive beach bordered by rows and rows of sand dunes.

Visiting the Royal National Park has been one of my favorite memories so far. Not only did visiting the park bring me on a beautiful hike, but it also taught me the importance of being more spontaneous and stepping out of my comfort zone when it comes to traveling—plans don’t have to work out perfectly to become great memories, and I hope to continue exploring and finding new places in the time I have left in Sydney. 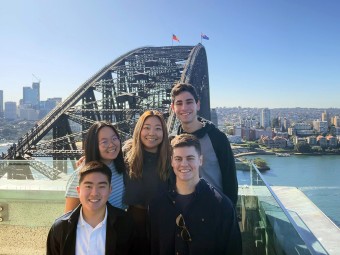 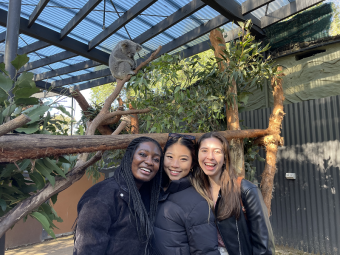