Angela Yang, a member of the Class of 2021, participated in a semester abroad in Thailand during the Fall Semester of 2019 where she focused on development and globalization. I sat down with her to learn more about her time abroad, what it's like spending a whole semester in Thailand, and what made it so meaningful.

Tell me about your Penn Abroad experience, where you went and what you studied!
I studied development and globalization in Khon Kaen, Thailand, which is a relatively small city in the northeast area of the country.

This is definitely a unique program so how did you hear about it?
I actually didn't know this program existed. I probably intended to go to France or Hong Kong or something like that initially. It started when I stopped by the Penn Study Abroad fair my sophomore fall at the Perry World House and I remember walking in and someone handed me a list of all of the approved study abroad programs. I was scanning through it and then I saw the words “globalization and development” and I thought, “Whoa, that is totally right up my alley!” This is what I wanted to study and with it being in Thailand, which I knew little about, it was a perfect match for my interests. So I looked it up when I got back home and I really fell in love with the program’s components because it had a really heavy emphasis on going to different community sites and learning about local issues. So after this, I just decided that I wanted to do it!

What surprised you most about learning a new environment?
I think my experience is pretty different from the typical semester abroad because I studied in a program. I had all my classes with the same eight girls from America and so I actually didn't study with Thai students. So for me, the shock was more the style of learning rather than the environment. We had a lot of student-led discussions, guest lectures and a lot of group work which were all things that I wasn't used to. So I really learned a lot about how I work in a group and how one can best communicate to do that.

Describe your favorite day in the program and what that was like.
I've been thinking a lot about this. I don't know if I could pick just one day because all of my favorite moments are so different. But I guess one of my favorite moments was from a community visit we did for five days. When we got there, we went exploring first through the rice fields together and that was super fun. It was also our driver’s birthday. So we asked him if he could take us to the nearest grocery store and we got the Thai version of American ingredients for s'mores. When we got back, we started a bonfire and started roasting s'mores. We even got the villagers to try some but they didn't really like them that much. They found them way too sweet! Afterwards, our two professors and the eight of us were just sitting around the bonfire and telling stories and watching the stars. We were trying to see if we could find any shooting stars or constellations and I felt it was just such a wholesome evening.

What was your favorite travel experience?
A highlight was probably fall break when me and two other girls in the program visited Vietnam and Cambodia. We had about eight days and we wanted to hit as many places as possible. I think we hit six cities in eight days. Every single day we woke up at the latest 6am to catch our flight to the next city. We would then get there and explore. It was so exhausting but it was worth it. We saw museums and even went on this night cruise. It was all so incredible. My other favorite travel experience was actually at the end of the program. I finally worked up the courage to travel alone as I've never done that before. So I went to Myanmar for a week by myself and it was so incredible. I stayed in many different hostels and I met so many different people from around the world. It really gave me confidence in myself.

What was the cuisine like? Any new foods that you tried?
The weirdest thing I tried was during my third community visit when there were two of us staying with our house mom. So a bunch of our friends came over that night for dinner and she cooked for us. There was one dish that looked like eggs and tomatoes. It was so delicious. When we were finished, we explained that it was so good to her. She didn't speak English and we barely spoke Thai, so there was a huge communication barrier. But we tried to ask what the dish was and she kept saying something in Thai that we couldn’t understand. After all of our friends left, she pulled out the wrapper of the food that it came in and we saw the bodies of dead red ants and their eggs. She then pointed at the plate I just ate from. Then she mimed out this entire scene where she grabbed a bucket and a stick and was shoving the bucket into the tree to get the red ant eggs. I definitely did not know that was what I was eating!

Wow! Being a vegetarian, that would have been hard for me but I’m glad it tasted good! On a different note, did you have any travel mishaps?
Yeah, so near the end of the program we did more trips together. We wanted to go somewhere new and we found this island in the southwest of Thailand.So we had to go to Bangkok by train first and then fly from Bangkok to Truong and then take a boat from Truong to the island; it was very difficult to get there. But the island was absolutely incredible; the water was so blue and there weren't that many tourists. However on the way back, we were on this ferry and it was supposed to be a two hour ride but there were some bumpy waters. Then one of the motors broke down so it took us three hours just to reach halfway and we were stuck in the middle of the ocean waiting for people to come and help us. It was getting dark and the waters were rough and everyone in the boat was freaking out. Our flight back to give our final presentations for the program was in a few hours so we probably weren't going to make that. We finally got back five or six hours later, managed to get another flight for the next morning, and got back 15 minutes late to give our presentation. Crazy experience.

What was your interaction with the locals like?
I did interact with locals a lot because of the nature of our program being very focused on the community. Each unit that we learned about, we would go into a community afterwards and see how these issues happen in real life. I think one of the coolest interactions we had was the first week that we got there. We learned about this protest happening in a village where the government was trying to take back the villagers’ land because they said that they were trespassing into National Forest reserves. But the villagers said, “No, we've been here for over 70 years and this is ours.” The issue was they didn't have the proper land titles, so they've been fighting for a really long time. There was a day where the villagers were protesting and the government said that they were going to go in and evict everyone. We visited the village and just sat there and listened to the villagers’ speeches. The government ended up not coming out that day but I think a few months later they worked out an agreement. It was just so impactful to see grandmothers and grandfathers protesting, making protest signs, and making really fiery speeches about how the people matter.

How did you budget, both in terms of time and money, for your experience abroad?
For money, it wasn't a big concern because everything was so cheap. Okay, so even with all of our travels and what I spent each month in Thailand, the cost was still cheaper than what I spend at Penn, so it actually worked out super well. For example, I could get a meal for $1 to $2. During our community visits, we were with host parents who cooked so we didn't have to spend anything while there. There were no expenses I wasn't expecting either, which was good. The time was much harder to balance. We had class Monday to Friday from nine to five. So if we wanted to travel anywhere, we could only do super close places on the weekends that didn't require extensive traveling.

What was your relationship with the rest of the students on your trip?
Because it was only just eight of us, we got really close. They were all American students and were all girls and so we literally spent 24/7 together. Everyone on the program was super into human rights, social justice, development issues, and I think it was just so cool for me to be in a space where everyone cared about the things that I was passionate about and so I was super thankful for that.

What did you learn about yourself?
I found that I gained a lot of confidence in myself and my abilities because I think at Penn, you often forget what you can do because you're surrounded by so many smart people. But when you go abroad and there are only eight of you. Everyone brings in different perspectives and experiences and that is something that you contribute too. I think I also learned that I'm really not afraid to take challenges and take risks.

What advice would you give to another student looking to study in Thailand?
One, definitely go for it. Don't hesitate to do it. Also I studied Thai a semester beforehand and I think that helped me. So really, look into that. It is important to know about the culture, the politics and the history before you go somewhere. In addition to those things, bring a lot of bug spray and sunscreen.

Most essential item you packed?
A microfiber towel.

The most useful local slang term or phrase that you learned?
Saying “Thank you.”

What are two words that you would use to describe your study abroad experience?
Unconventional and intimate. 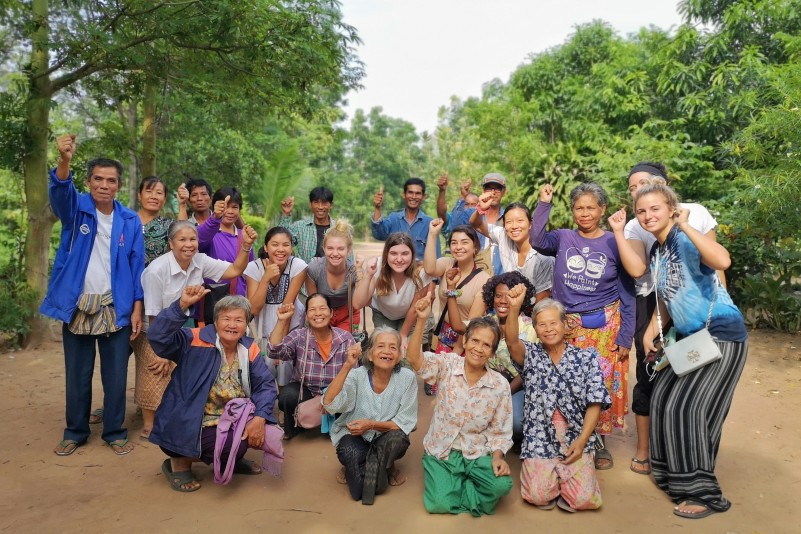 Angela with local community members and fellow students in Thailand 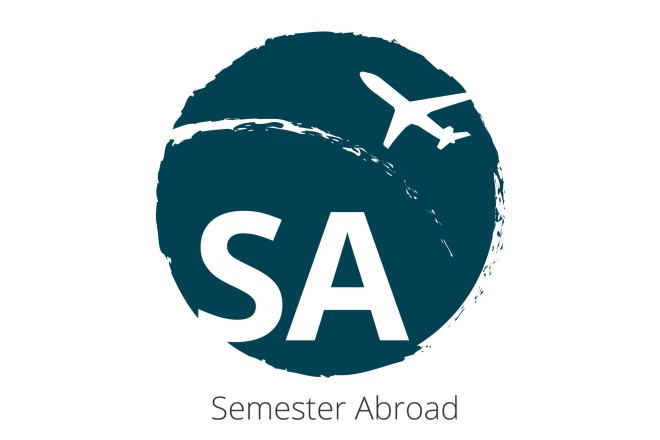 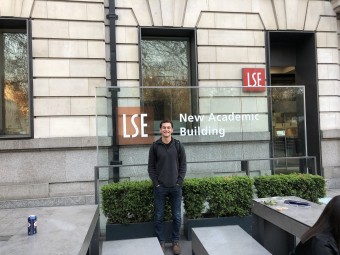 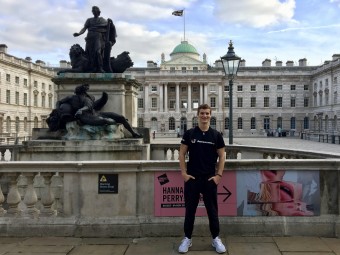 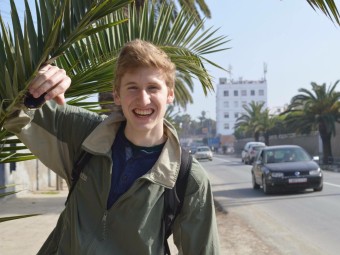