History of Penn in China

With interactions dating back to 1823, engagement between Penn and China predates the founding of many American universities. This ongoing exchange of ideas and collaborative advancement of knowledge has shaped thought, theory, and practice across the disciplines in America, China, and around the world for nearly two hundred years.

Founded in 1765, Penn’s medical school was the first in America—and its graduates were among the first physicians to introduce Western medicine into China, treating Chinese patients and training Chinese doctors.

Divie Bethune McCartee (M 1840) served as U. S. Consul in Ningbo, Chefoo (present-day Yantai), and Shanghai, and professor of law and natural science at the Imperial University of Tokyo.

1899: Moon Hung Chaun (周夢熊) becomes first Chinese graduate of Penn, earning a Doctorate in Dental Surgery from what was one of the only university-affiliated dental schools in the United States.

The rapid advancement of science, industry, and all academic disciplines over the course of the 20th century was matched only by the growing breadth and depth of the partnerships that formed between the University of Pennsylvania and educational and corporate institutions throughout China. A century that began with a Penn School of Medicine alumnus helping a Cantonese college establish a medical school drew to a close with mutually-beneficial affiliations that were beginning to make a global impact on the practice of business, medicine, architecture, and a variety of other fields.

Wu Ting Fang, the Chinese Minister to the United States, spoke at the dedication of Penn Law School’s new building, now Silverman Hall, where he was awarded an honorary Doctorate of Laws, 1900.

Josiah C. McCracken (M 1901) joined with Canton Christian College to establish the University Medical College in Canton in 1907, where he served as president from 1907-1913. The close relationship that he, as its president, and other Penn alumni on the faculty fostered between the College and Penn’s School of Medicine guaranteed the era’s highest standards of medical education.

Kwang Pu Chen (W 1909) was China’s first Wharton School graduate. By the 1920s Chen became the organizer and manager of the Shanghai Commercial and Savings Bank and head of the Chinese Bankers’ Association of Shanghai. Widely known for introducing modern operating and management models to China's banking industry, Chen was also influential in sending his countrymen to Penn and for some period of time headed China’s Pennsylvania Alumni Association.

It is almost impossible to describe any significant innovation in the history of modern Chinese banks without mentioning K.P. Chen's name.

Penn participates in the 1910 Nanyang Industrial Exposition, China’s first, at the invitation of K.P. Chen, who served as director of the Exposition’s foreign affairs. Penn’s exhibit, which included large photographic views, seals, flags, pennants, and banners, garnered a diploma in recognition of its collective educational and artistic value.

We are convinced, too, that our work and all similar work tends to bring about a better understanding between the peoples of the two countries represented, and that is worth living and striving for. 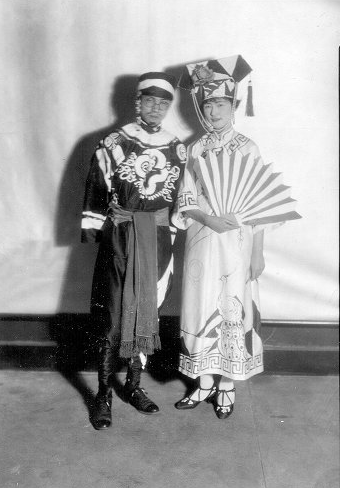 Liang Ssu-ch’eng (B. Arch 1927; M. Arch 1927), the “Father of Modern Chinese Architecture,” and his wife Phyllis Whei-Yin Lin (BFA 1927), the first female architect in China, graduate from Penn’s School of Architecture. Liang and Lin were architects, scholars, poets, and humanists who drew upon their wide-ranging intellectual pursuits to create ground-breaking bodies of work—such as their joint authorship of China's first modern history on Chinese architecture and joint designs for the National Emblem of the People's Republic of China and the Monument to the People's Heroes in Tiananmen Square. 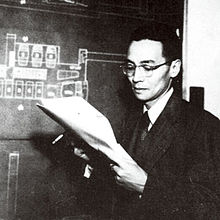 Liang Ssu-ch’eng at Tsinghua University, 1950. Liang Ssu-ch’eng became the preeminent historian of Chinese architecture and planning and the chief preservationist under the Mao government. Liang was part of the team that discovered and analyzed the two oldest timber structures in China, and was China’s representative on the design of the United Nations Headquarters building in New York City. Also a prominent educator, he founded the architecture departments at Northeastern University in Shenyang (1928) and Tsinghua University in Beijing (1946).

Phyllis Whei-Yin Lin served as a part-time instructor at Penn during her time as a student. She went on to do graduate work in design at Yale University before returning to China, where she helped her husband establish Northeastern University’s Architectural Department.

1966: Hoping to reopen communications with their Chinese colleagues that had closed during the Communist Revolution, Penn faculty begin calling on U.S. officials to change America’s policy toward China.

1975: Penn President Martin Meyerson visits alumni in Hong Kong, becoming the first Penn President visit to China. Meyerson’s visit was a key part of the University’s ongoing engagement in the renewal of U.S.-China relations after President Nixon’s much-publicized trip to China in 1972 effected the gradual re-establishment of trade, educational, and cultural exchanges.

Eager to reconnect with their Chinese partners, Penn took an active role in the rekindling of U.S.-China relations from the 1970’s onward and never looked back. Highlights of their many exchanges over the next two decades underscore the importance of expanding academic engagement between these two countries at a time of increasing technological advancement:

1980: The growing cross-cultural engagement between Penn and Universities in China leads to Penn’s first formal partnership with a Chinese university. The Wharton School and Penn’s School of Engineering enter into an agreement with Shanghai Jiao Tong University (SJTU). The accord stated that Penn would help SJTU develop programs, while SJTU would keep Penn apprised of Chinese developments in fields such as political science and environmental studies.

21st Century: Penn-China Partnerships Prepare Global Leaders on Both Side of the Pacific

The 21st century ushered in an era of prolific growth in Penn-China engagement, encompassing numerous projects, exchanges, and collaborations. The extensive nature of these interactions led to a need for Penn to further support and facilitate the full scope of its engagement there: a need fulfilled by the 2015 opening of the Penn-Wharton China Center.

China’s hosting of four Wharton Global Forums and six visits from Penn president Amy Gutmann offer a big-picture view of a banner decade in the history of Penn-China relations.

2006: Less than two years after her arrival at Penn, President Amy Gutmann visits Beijing, Hong Kong, and Singapore on what was one of her first international visits as president. While there, she shared her vision for Penn and higher education with alumni, parents, and friends of the University. Together with Gary Hack, dean of Penn Design, Dr. Gutmann also announced a partnership between Tsinghua University and Penn Design to build a new energy efficiency center at Tsinghua.

2008: President Gutmann rolls out “Making History” capital campaign in Hong Kong to 150 alumni, family, and friends of the University at a dinner hosted by local Penn Trustees Raymond Ch’ien (GR’78) and Bill Cheung (D’81, GD’82) and attended by then-Chairman of the Board James S. Riepe (W’65, WG ’67). The Campaign’s goals included supporting the integration of disciplines with high social impact, adding state-of-the-art facilities that advance Penn’s commitment to sustainability, continued recruiting of world-class faculty, and the expanding Penn’s global impact and engagement. 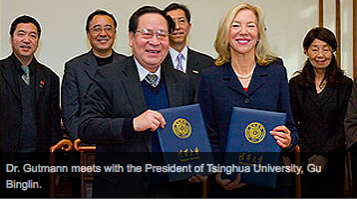 The Penn-Tsinghua agreement established the intention to mutually develop a conference on undergraduate education that would address best practices and leadership skills, identified a major research collaboration that would be spearheaded by Penn’s School of Engineering and Applied Science, and proposed renewed collaborations between Tsinghua’s and Penn’s business schools and law schools.

The academic and research collaboration agreement between Penn and Shanghai Jiao Tong University included the identification of student and faculty exchanges and collaborative research opportunities between SJTU and Penn’s School of Engineering and Applied Science, School of Nursing, School of Medicine, and Graduate School of Education. The agreement also proposed the formation of a joint Center of Excellence in Medical Imaging and exploration of a conference on International Financial Market Regulation. with jointly sponsored by Penn’s Wharton and Law schools and their counterparts at SJTU.

2010: President Gutmann leads a delegation to China to initiate and reaffirm Penn’s academic partnerships and agreements with Tsinghua University and Peking University.

Peking University hosted the University of Pennsylvania for “Penn Day,” which drew over 400 alumni, faculty, and business leaders. Highlights of the day included the memorandum of understanding signed by the two university presidents to expand the partnership between the two universities, the reaffirmation of partnerships between their Wharton and Guanghua business schools, and the memorandum of understanding between Penn’s School of Dental Medicine and Peking’s School of Stomatology. Penn and Peking faculty members also convened academic panels on global entrepreneurship and globalization of Chinese and American enterprises with Wharton faculty members, and Penn political science professor Avery Goldstein participated with Jacques deLisle and leading Peking experts in a panel on U.S.-China relations.

The formal agreement between Penn and Tsinghua University enhanced prior agreements involving academic and research collaborations between Penn's School of Design, Law School and School of Engineering and Applied Science and their Tsinghua counterparts.

The two leaders also reaffirmed their commitment to environmental sustainability through the work of the Penn-Tsinghua T.C. Chan Center for Building Simulation and Energy Studies which has locations on both the Penn and Tsinghua campuses and is home to most of the schools' joint energy and sustainability work. The T.C. Chan Center is one of the only centers in the world devoted solely to sustainable building models and research, and as such, hosted the United Nations Environment Programme-Sustainable Buildings and Climate Initiative Fall Symposium in 2011.

2011: Dr. Amy Gutmann visited East Asia to formalize academic partnerships in Seoul and Beijing and host alumni gatherings in Korea and in Taipei, Taiwan, the latter event being attended by more than 200 guests. 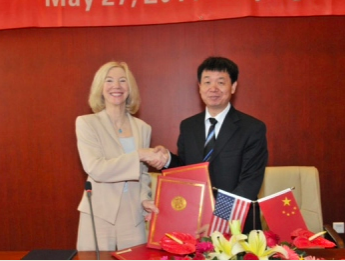 In Beijing, President Amy Gutmann and Chinese Academy of Sciences (CAS) Vice President Li Jiayang signed an MOU to establish a cooperative research relationship between the two institutions. As part of the agreement, researchers and scientists from Penn and the CAS Institute of Biophysics will develop a center to advance the application of neuroimaging to basic and cognitive neuroscience research, including the development and evaluation of novel imaging technologies and their translation into new biomedical applications, and basic science studies for detection, characterization, diagnosis, and image-guided treatment of brain diseases affecting people around the world. 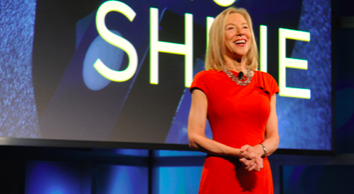