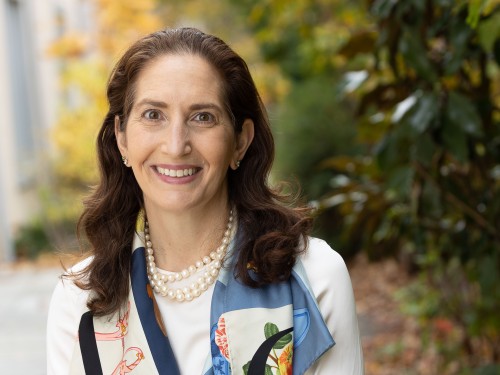 Prior to joining the Provost’s Office, Dr. Gadsden spent five years (2009-2014) as Associate Dean for International and Strategic Initiatives at Penn Law, where she built a comprehensive program aimed at expanding the Law School’s global curriculum, professional development opportunities, and reputation and managed cross-disciplinary programs.  She established or expanded all of Penn Law’s signature international programs, including the Global Research Seminar, the Bok Visiting Professors Program, and the Penn Law International Internship and Summer Human Rights Fellows Programs.  She also played a key role in building Penn Law’s cross disciplinary programs, pioneering new initiatives in law and technology and law and health. As an adjunct faculty member, Dr. Gadsden taught seminars in international human rights and rule of law.

Before coming to Penn, Dr. Gadsden spent more than a decade working in the foreign policy field with a focus on China.  She served as a Country Director for the International Republican Institute and as a Special Advisor for China at the United States Department of State.  She has published several articles on democracy and human rights in China, documenting changes in legal and civil society reform.  Dr. Gadsden was one of the first American scholars to observe and write about grassroots elections in the PRC in the mid-1990s.   Dr. Gadsden has also consulted for the Pew Charitable Trusts, the United Nations Development Programme, and the United Nations Office of the High Commissioner for Human Rights.  She holds a B.A. from Yale College and a Ph.D. in Chinese legal history from the University of Pennsylvania and serves on the boards of the William Penn Charter School and International House Philadelphia.