On Friday, October 11, nineteen students from nearly as many countries traveled to Washington, D.C. to discuss the nuts and bolts of diplomacy, policymaking and leadership with a diverse group of practitioners. The trip took place as part of the Penn World Scholars Program, which provides a select group of exceptional international students with a variety of hands-on opportunities to hone their leadership skills.

The excursion to the nation's capital kicked off with a stop at the U.S. Department of State, where the students sat down with a panel of foreign and civil servants. The panelists reflected on their career trajectories, which saw them involved in resolving some of the century's most pressing diplomatic challenges in far-flung posts such as Libya and Afghanistan. They emphasized the importance of identifying mentors, remaining grateful and self-confident in the face of adversity, and appreciating the human dimension of leadership.

The Scholars' day continued at the Penn Biden Center for Diplomacy and Global Engagement, where they were joined for lunch by Todd Robinson, Senior Advisor for Central America in the Bureau of Western Hemisphere Affairs, who served as the U.S. Ambassador to Guatemala from 2014-2017. They also engaged in discussion with Dr. Dafna Rand, the Vice President for Policy and Research at Mercy Corps, a non-governmental humanitarian aid organization.

The day was rounded out by a visit to Capitol Hill and a conversation with a panel of Congressional staffers who discussed what energizes them about a career in public service. Penn’s Office of Government and Community Affairs (OGCA) organized the panel, which included an alumnus of Penn.

“The trip made me aware of the different career opportunities in the public sector and allowed me to interact with people that are extremely passionate about their careers in public service,” says Mariana Velasco, a second-year Penn World Scholar in the School of Arts and Sciences from Guadalajara, Mexico. “[It] inspired me to pursue a leadership career in foreign service. I think that it is often difficult to have access to this kind of opportunities that open your eyes to other career paths on campus, so I am very glad that we had this experience. Talking to the former U.S. Ambassador to Guatemala was probably the highlight of the trek to me; it is one of those moments that inspire you to become a leader as well and value an international undergraduate education."

The trip to D.C. is the signature second-year event in the freshly re-imagined Penn World Scholars Program, which was established in 2006 and has been administered by International Student and Scholar Services (ISSS) with Dr. Rudie Altamirano as its director since Fall 2018. At the beginning of this semester, 14 students from 14 countries arrived on campus to join the Penn World Scholars Class of 2023. In September, the first-year Scholars participated in Penn’s Intercultural Leadership Program in Camp Tockwogh, Maryland. 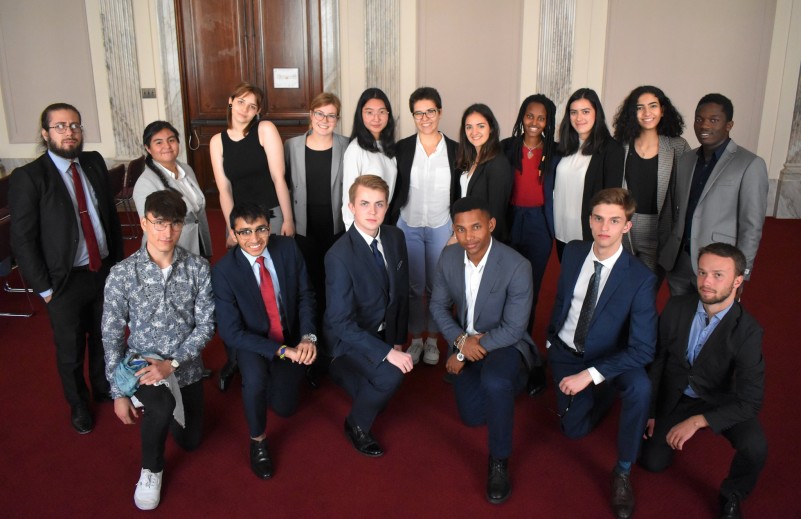