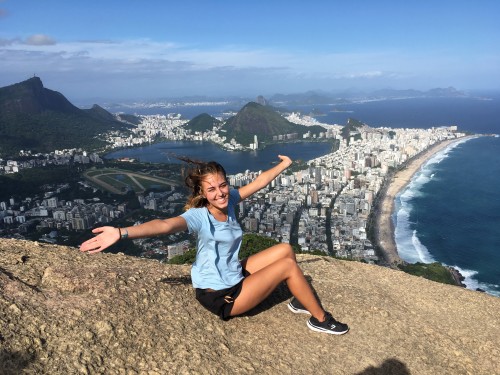 I study International Relations, so everything related to my coursework and major here at Penn! I took a class in Human Rights which gave me insight and tools with which to approach my concentration in International Development. I took a class on the International System in the 20th Century which was interesting because, despite it covering the history of the world in that period, the professor gave a lot more insight on South American countries than I have noticed been given in other general history courses here at Penn. Being abroad also helped me apply the language lessons I took at Penn (Portuguese) and my own ability as a native speaker. It's one thing to study the language and a completely other thing to be in the country where that language is spoken - I learned so much and improved all aspects of my language speaking and comprehension!

I took all of my classes in Portuguese, which nobody else in my study abroad program did - so definitely feel free to ask about navigating course selection to ensure you're taking classes with professors that welcome foreign students. I became friends with a student studying abroad from Italy, and she had a horrible experience with a professor who taught his class in Portuguese because he refused to work with foreign students; however, my friend didn't know that at the time. Students should ask me about my knowledge of the professors at PUC because I should be able to provide some guidance or point them to students or individuals who can. Besides these things, I am a native Portuguese speaker - my dad immigrated from Azores, Portugal so my siblings and I grew up speaking Portuguese (Portugal). I learned a new dialect of Portuguese in Brazil and widened my understanding of nuances of the local languages, accents and slang - this was groundbreaking for me and I would love to talk about it with others, especially Spanish and Portuguese speakers who may think they're at an advantage or disadvantage studying in Brazil due to their language skills.