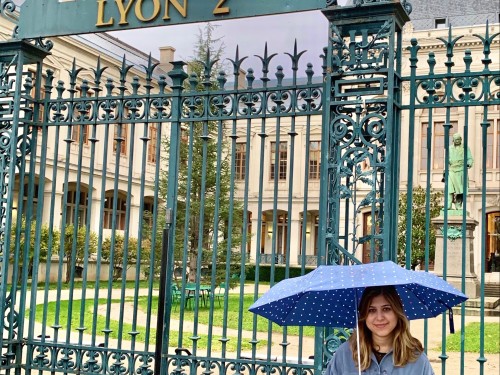 As a French and Francophone Studies minor, practically every moment of my experience in France related to my coursework at Penn. Because very few people in Lyon understood English, I was completely immersed in the French language and culture. I ultimately learned how to better communicate and express myself in French, both in casual conversation as well as formally within classes I took among French students. Residing with a host mother gave me ample opportunity to practice my French in a low-stress environment as I was not scared to make mistakes in my speech or grammar. As a result, my spoken French drastically improved by the time I gave my host mother the last bise before departing for the U.S.

My host mother was also a great resource for learning about French culture. She often encouraged me to explore the many museums and parks in Lyon. I can definitely say that by the end of my semester abroad, I had explored every centimeter of the city. One of the most special opportunities I had while abroad was attending national events about which I had previously learned in French culture classes taken at Penn and in high school. One such event was the Fête des Lumières, during which light performances are shown on the walls of prominent buildings in town. I was able to walk around to every light installation. The festival was probably the most spectacular few nights of my life. My time abroad built upon my existing connection to France and its culture while also immensely improving my language skills, and for that I will forever be grateful for the experience.