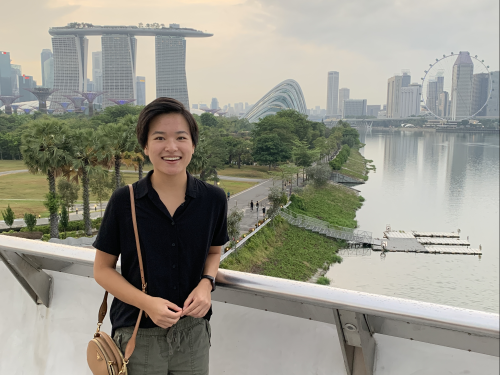 I'm a political science major in the College and one of the reasons I was compelled to study abroad was to learn about politics from another country's perspective. Most of the courses I took abroad were related to Singapore's government and politics. Singapore is a vastly different country compared to America and both have different forms of governance. The size of the entire country of Singapore is only about the size of New York City, and its population consists of 6 million people in comparison to America's 328 million. Taking classes abroad and learning about politics from a different perspective taught me that the world isn't as black and white as it seems, and I was encouraged to be open-minded when it comes to learning. I often found myself engaging in thought-provoking conversations with local students and my background as a political science major from America greatly shaped how I thought. For instance, they would claim that Singapore's structured and pragmatic approach to governance was beneficial for the country, but I argued that Singapore's paternalistic politics straddle on the verge of authoritarianism and could be considered an infringement on human rights and freedoms. On the other hand, it was fun hearing about Singaporeans' perspective on how dysfunctional American politics could be and seeing the Singaporean government's response to the COVID-19 pandemic made me admire how their government was much more efficient than America's.