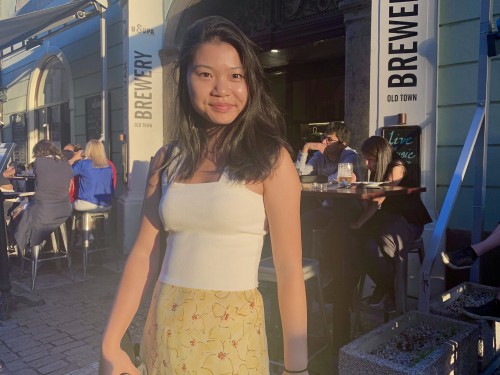 As a storyteller, I wanted to expand my horizons and learn about the history and traditions of other parts of the world in order to better capture the human experience. FAMU is one of the world’s oldest and most respected film schools. I had the autonomy to curate my own education and experience in film production, formally learn from some of the most experienced filmmakers and critics, immerse myself in a community of peers with similar passions and aspirations, and dedicate all my energy and creativity towards producing a final film. The most meaningful aspect of studying at FAMU was getting to practice with a 16mm camera and explore its visual power. The old physical procedure of filmmaking allowed me to see and feel 24 frames of every second and gain a deeper understanding of time, pace, and color that digital filmmaking does not provide nowadays. Penn is an amazing place that has sparked my interest in filmmaking and built my foundational knowledge of film as a craft. Being in Prague has only strengthened my excitement to pursue a career in the film industry - as the crossroad of Central Europe and the birthplace of the magic lantern, the Czech Republic and FAMU provided an atmosphere most conducive to dynamic learning in all aspects.