On April 15-16, 2019, scholars, policymakers, and journalists convened at Perry World House for a colloquium on “A Changing Climate, A Changing World: Policy Challenges and Opportunities in Migration and Urbanization.” Read the Colloquium report and thought pieces here.

The first day addressed the implications of climate change for cities and the other places people live, including its impact on where people want and are forced to move. In particular, the scholars looked at city-level and community-led climate action—including adaptation and mitigation strategies as well as best practices for sustainable development. The second day included the exchange of innovative approaches to climate policy, featuring conversations about policymaking from the city to the global level.

The first day of the colloquium was marked by a rich exchange among scholars and policymakers of current research and challenges surrounding climate action. With the support of Carnegie Corporation of New York, Perry World House drew upon the expertise of practitioners and researchers to address the challenges of climate change in a creative and inclusive manner across the research and public policy spheres. 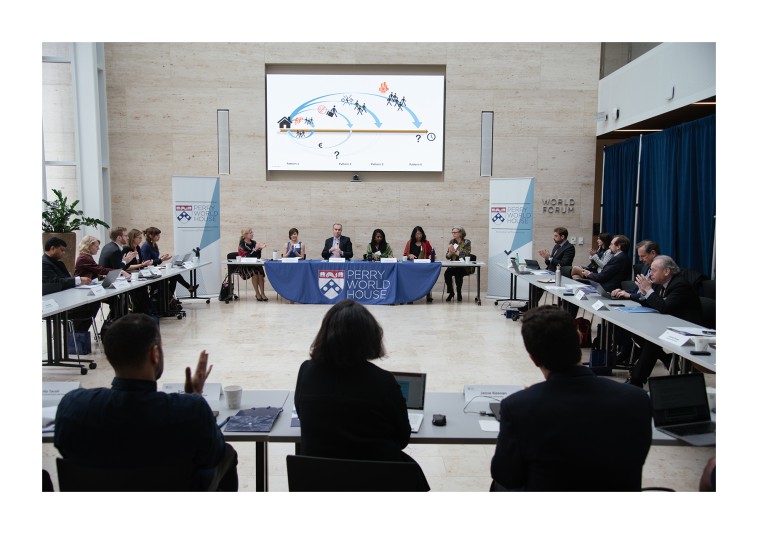 The day opened with a discussion of the realities of climate change, including its inevitable impacts and the best predictions of current models, between Aromar Revi of the Indian Institute for Human Settlements and Penn’s Irina Marinov. Following this, a panel analyzed how a changing climate is affecting where people live and move, including what research and policy work are needed for the world to prepare and respond to the accompanying changes—from shifting legal norms and protection of cultural heritage to security concerns and disaster risk mitigation. 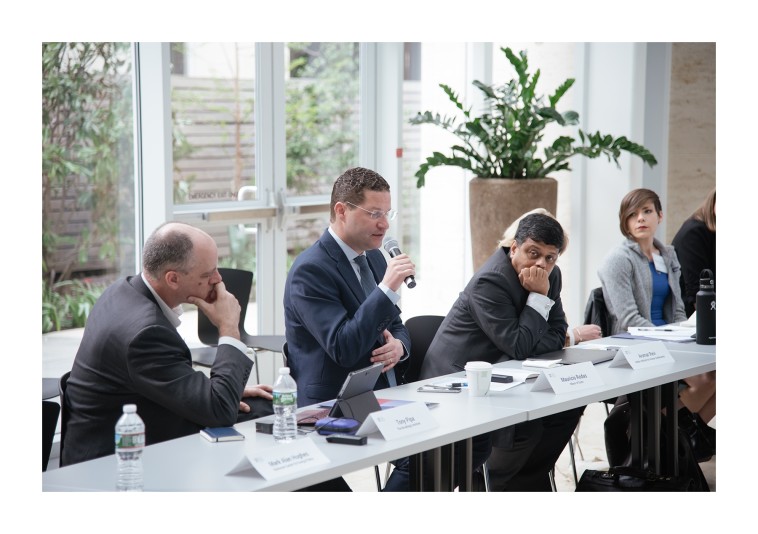 Mayor Mauricio Rodas of Quito, Ecuador comments on city climate adaptation efforts from a local and city network perspective. To his left is Tony Pipa of the Brookings Institution, and to his right are Aromar Revi of the Indian Institute for Human Settlements and Victoria Herrmann of The Arctic Institute.

The next panel focused specifically on climate-driven urbanization, as an important subset of shifting migration patterns, as well as city climate adaptation. Researchers, including Deborah Balk of CUNY, Jesse Keenan of Harvard, and Cecilia Tacoli of the International Institute for Environment and Development, presented their work on city planning and design. On the practitioner side, Marc Forni of the World Bank and Samer Saliba of the International Rescue Committee emphasized disaster preparedness, resiliency, and inclusion of vulnerable populations in these processes as well as ideas for financing these efforts.

Moderated by Christine Knapp, Director of Philadelphia’s Office of Sustainability, the final panel considered how community-driven and often city-based solutions can be leveraged on a larger scale to shape sustainable development within and beyond cities. Andrea Nightingale of the University of Oslo spoke to local approaches to sustainable development in rural communities, while Steve Cohen of Columbia, Mark Alan Hughes of Penn’s Kleinman Center for Energy Policy, Tony Pipa of Brookings Institution, and Mayor Rodas of Quito, Ecuador highlighted city efforts to develop and finance sustainable urban infrastructure. 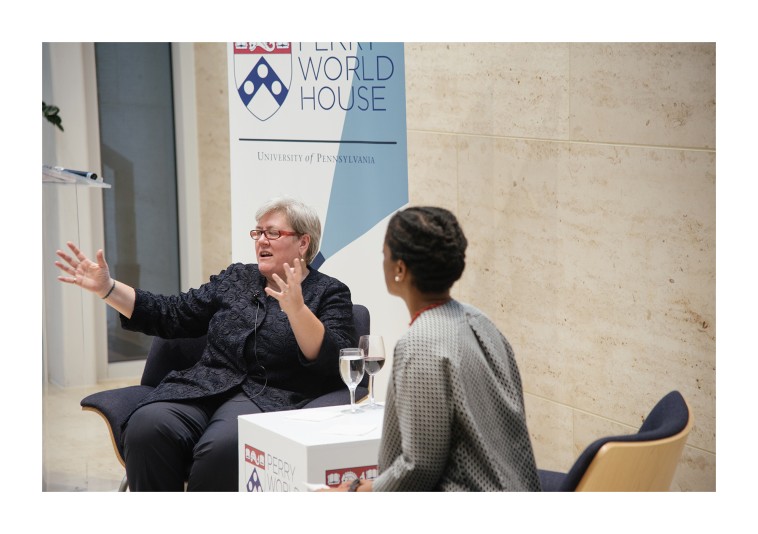 Over dinner on Day 1, Rachel Kyte, CEO and UNSG Special Representative of Sustainable Energy for All, and LaShawn Jefferson, Perry World House Deputy Director, discussed the effects of climate change on our day-to-day lives and the urgency of climate action.

Dinner featured a conversation between Rachel Kyte, CEO and Special Representative of the UN Secretary-General for Sustainable Energy for All and Dean Designate of the Fletcher School of Tufts University, and LaShawn Jefferson, Perry World House’s Deputy Director.

The colloquium’s public forum featured four conversations with leaders from different levels of government—city, state, national, and international—and their contributions to and unique challenges within climate change and policies to address it. 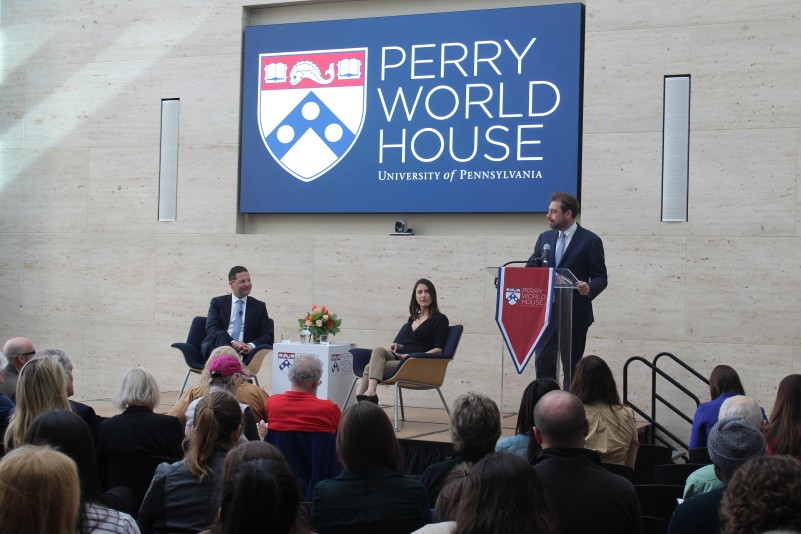 The Philadelphia Inquirer’s Claudia Vargas led a conversation with Mayor Mauricio Rodas of Quito, Ecuador about climate mitigation policies at the city level. Rodas, who received two master’s degrees in political science and government administration from Penn, emphasized the importance of strict budgeting and the role that private investment can play. That was how he facilitated the construction of Quito’s metro, the first subway system in Ecuador. Rodas further noted the significance of integrating small projects into existing infrastructure, such as utilizing water sanitation centers to generate energy. 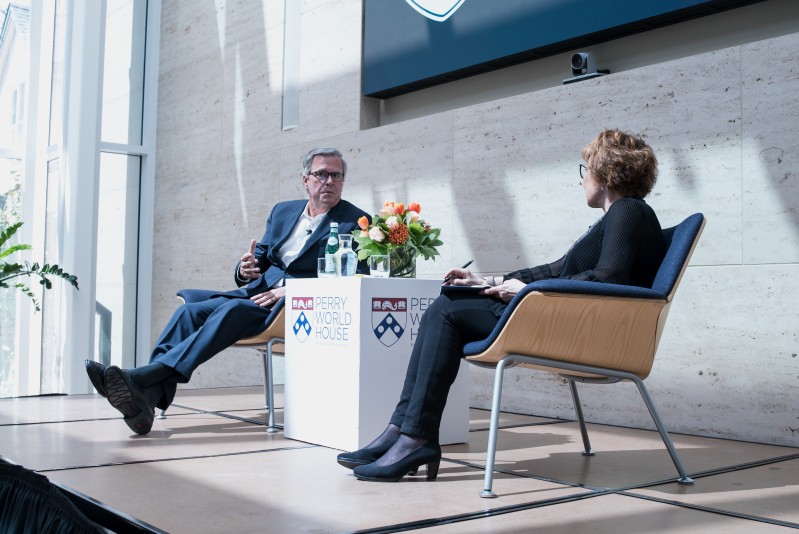 To a standing-room only audience, Former Governor Jeb Bush of Florida spoke with NPR’s Deb Amos on addressing climate change through new technology and the private sector, and why he believes all people must be stewards of the Earth’s environment.

In an engaging conversation with NPR’s Deborah Amos, Jeb Bush, former Governor of Florida and Penn Presidential Professor of Practice, emphasized that “our infrastructure needs massive investing” to prepare for future climate change. Stressing the urgency of climate adaptation, he further noted: “We’re not capable right now in our political system to make a small sacrifice that generates long-term benefits.” This failure to focus on the long term, he argued, will have a dramatic deleterious impact on the environment. 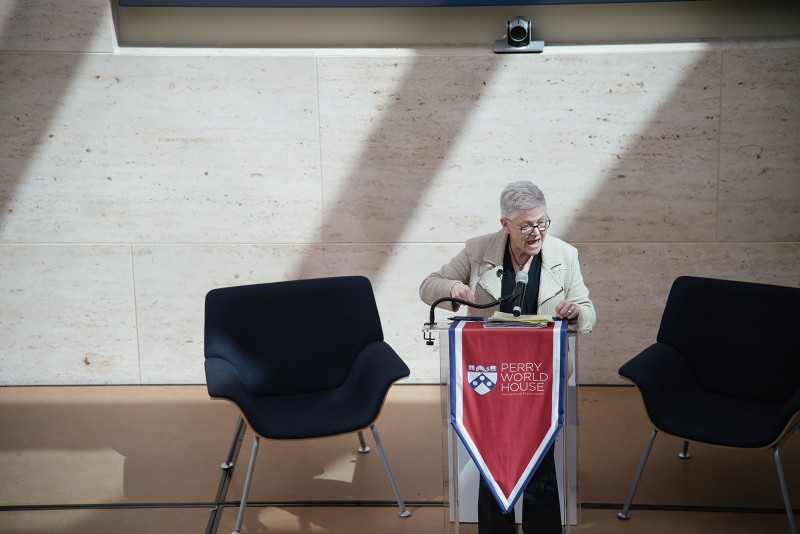 Gina McCarthy, former Administrator of the Environmental Protection Agency, delivered a blistering critique of the U.S. government’s failure to act on climate change and withdrawal from international leadership on the issue.

Gina McCarthy, former U.S. Environmental Protection Agency Administrator and now Director of Harvard’s Center for Climate Health and the Global Environment gave a keynote address and spoke with Robinson Meyer of The Atlantic. They discussed national policymaking for climate mitigation, regulation, and the current U.S. government’s policies. “Let’s talk about [climate change] as a moral responsibility,” McCarthy said, expressing her extreme optimism for the future despite the current state of climate policy gridlock. 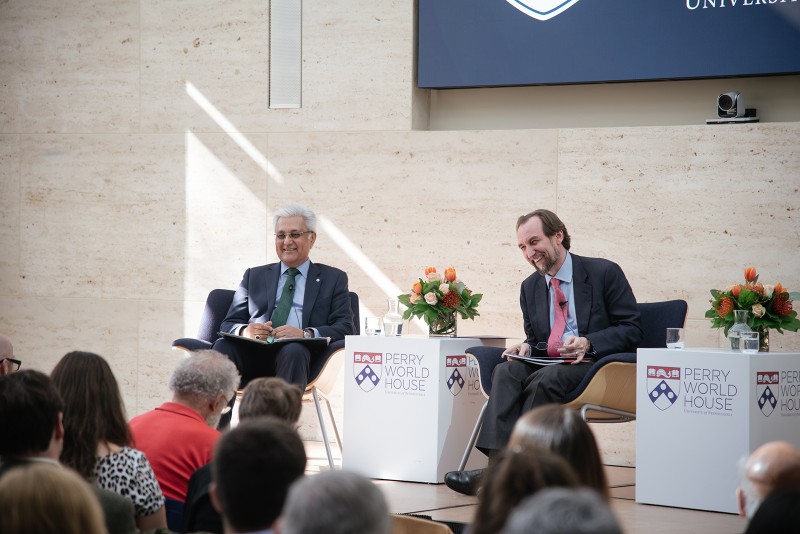 A moment of levity on Day 2 in the conversation between Ovais Sarmad, UN Climate Change’s Deputy Executive Secretary, and Zeid Ra’ad Al Hussein, Perry World House’s Distinguished Global Leader in-Residence and former UN High Commissioner for Human Rights. Their discussion focused on the human rights implications of climate change and potential paradigm shifts in migration, global governance, and more in the wake of its worsening effects.

The final panel of the day featured Ovais Sarmad, Deputy Executive Secretary of the United Nations Framework Convention on Climate Change (UNFCCC), in conversation with Zeid Ra’ad Al Hussein, Perry World House’s Distinguished Global Leader in-Residence and former United Nations High Commissioner for Human Rights. Moderated by LaShawn Jefferson, Perry World House’s Deputy Director, the panel focused on intergovernmental efforts for climate policy. In reference to growing grassroots movements across the globe, Al Hussein noted: “Governments don’t function well without pressure, and that pressure has to come from somewhere. There needs to be popular mobilization or we’re all going to suffer.” In total, the final panel reflected the great optimism tied to the creative, innovative, and inclusive policies discussed during the Colloquium and hope for the future.

Tackling climate change on all levels