Global Order Colloquium: September 27-28, 2021 How to See the Future: Forecasting and Global Policy

On September 27-28, 2021, Perry World House, the University of Pennsylvania’s hub for global affairs and international policy, convened its annual Global Order Colloquium, this year focusing on How to See the Future: Forecasting and Global Policy. Click here to read the report and thought pieces from the colloquium.

The colloquium tackled one big question from a variety of interdisciplinary perspectives: How can we better see the future? More specifically, what forecasting methods are most promising but neglected, how can these methods be implemented, how can forecasts be better communicated, and how can they be made most useful to policymakers? 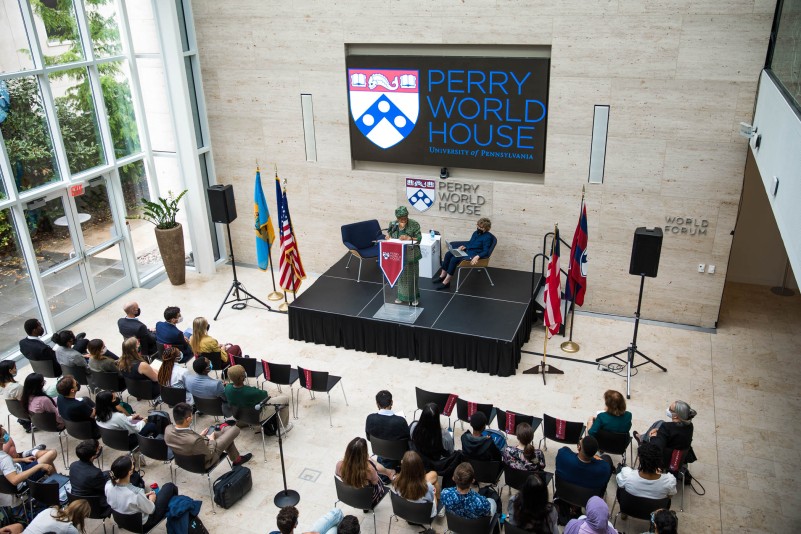 The colloquium included a workshop and three public keynotes. The workshop brought together top academics, current and former government officials from the U.S. and abroad, industry representatives, and others for high-level discussions—in a hybrid format, both on Zoom and physically at Perry World House. The discussions bridged the gap between academia and policy in three key issue areas: global health, the global economy, and national security.

During the conversation, Muir shared that the U.S. intelligence community is starting a new crowdsourced forecasting initiative. "We are incorporating some of the insights that we've gotten ... into a new crowdsourced forecasting tool designed to be inclusive, open, and responsive to both analyst and policymaker desire for transparency and relevance," he said. "The NIC [National Intelligence Council] has established a new position focused on forecasting, and I know that CIA is planning a new forecasting workshop focused on probabilistic thinking methods." Perry World House had recommended the re-implementation of crowdsourced probabilistic forecasting tools earlier this year in Keeping Score.

"The key thing," as Muir put it, is that "the tools have to work for the analysts and they have to better serve the policymakers. We need to figure out how to demonstrate to the analysts and to the policymakers the benefits of blending machine-based analysis with expertise, and in ways that can address anomalies, inconsistencies, and uncertainties and deliver that insight at speed."

How to do this—how to ensure that forecasting insights can be applied rigorously to the world's biggest policy problems—was the focus of the expert discussions on September 27. 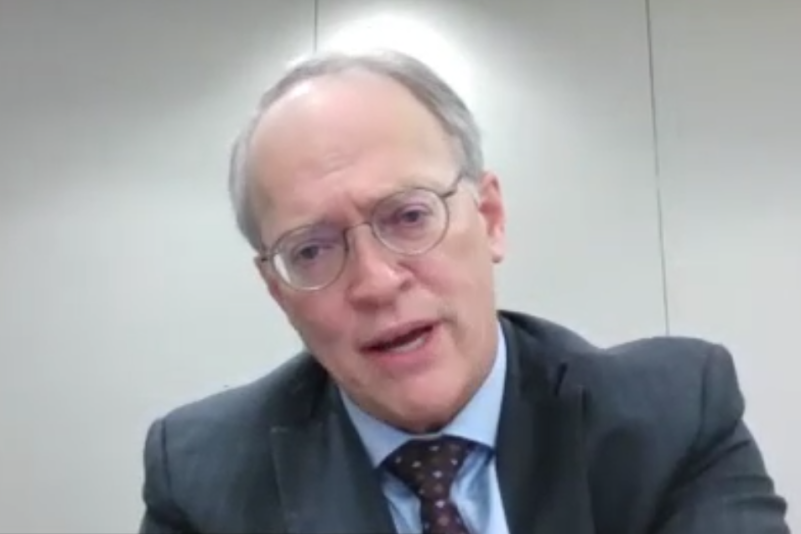 We are incorporating some of the insights that we’ve gotten from years past and in the academic literature now into a new crowdsourced forecasting tool designed to be inclusive, open, and responsive to both analyst and policymaker desire for transparency and relevance.
Morgan Muir, Deputy Director of National Intelligence for Mission Integration
Monday, September 27, 2021
Expert Discussions

After the keynote, Perry World House convened a workshop on geopolitical forecasting, with panels on the global economy, national security, and global public health. Some participants—vaccinated and masked—joined in person in the conference room while others joined via Zoom.

Scholars and a range of policy experts and practitioners gathered to discuss the future of the world from a variety of perspectives and methods. Participants highlighted key challenges moving forward, including: how to account for policymaker intervention in probabilistic forecasts, how to make various methods complementary, how to communicate forecasts most effectively, and what lessons the fields of economics, public health, and national security can teach one another on effective forecasting.

The workshop discussions were held in a closed-door format under a non-attribution rule. A post-workshop report, to be published later this fall, will discuss its insights in greater detail. 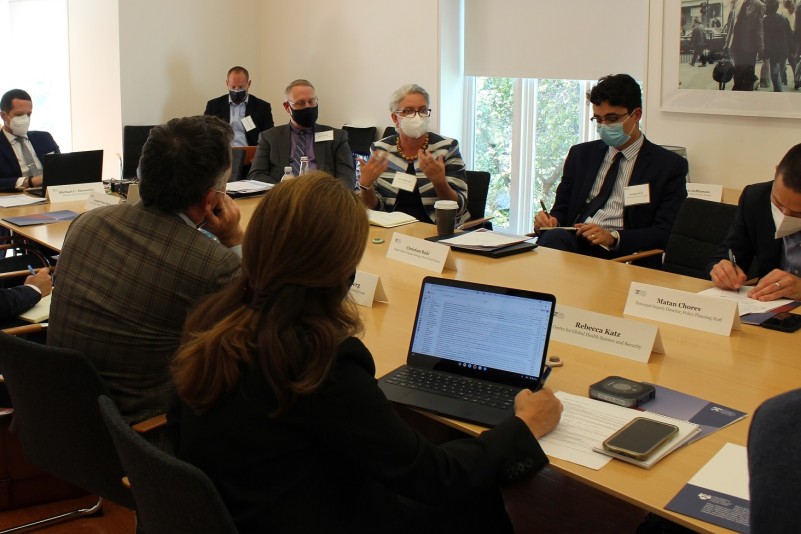 Kicking off the second day of the colloquium, Perry World House welcomed a 2021-2022 Distinguished Global Leader, President Ellen Johnson Sirleaf, to Penn’s campus. As Penn Nursing Dean Antonia Villarruel noted in her introductory remarks, this was not President Sirleaf’s first time in Philadelphia—her last visit, in July 1985, resulted in her arrest for “sedition” in Liberia after she criticized that country’s then-President in a speech to the Association of Liberians in the United States that summer.

Watch the conversation with President Ellen Johnson Sirleaf on YouTube

President Sirleaf spoke openly and powerfully about the issues facing her country and the world in her event “Fighting for a Better Future with ‘Africa’s Iron Lady,’” moderated by National Public Radio’s Deborah Amos. They discussed a range of issues, her leadership through Liberia’s crisis and reconciliation after a long civil war, the issue of pandemic preparedness and response and her work as co-chair of the Independent Panel on Pandemic Preparedness and Response, the wave of protests and turmoil around the world, and what Penn’s students can do to help make the world a better place.

The president pointed out the world’s ambivalent track record on the Sustainable Development Goals, saying, “This year, 2021, we're more than halfway to our target, which is 2030. And the record is clear that we are not on course. We have had some breakthroughs … but it's clear that too many are being left behind.” Given her deep experience on fighting infectious disease outbreaks, President Sirleaf discussed possible policy solutions to the COVID-19 pandemic, including the importance of technological transfers and intellectual property rights in ensuring a truly global supply of vaccines. “And it's not enough to have vaccines manufactured in this country or in Russia or in China or India and have them transported” to the Global South; rather, President Sirleaf explained, we must bolster vaccine manufacturing capacity throughout the world, especially given the challenges of transporting the vaccines over longer distances.

President Sirleaf also thanked the Penn’s faculty: “This university’s influence reaches the distant shores of West Africa, where we reside. Many of those who have come here to obtain their education and their professional skills have gone back and are rendering public and professional service well-appreciated in our countries.” 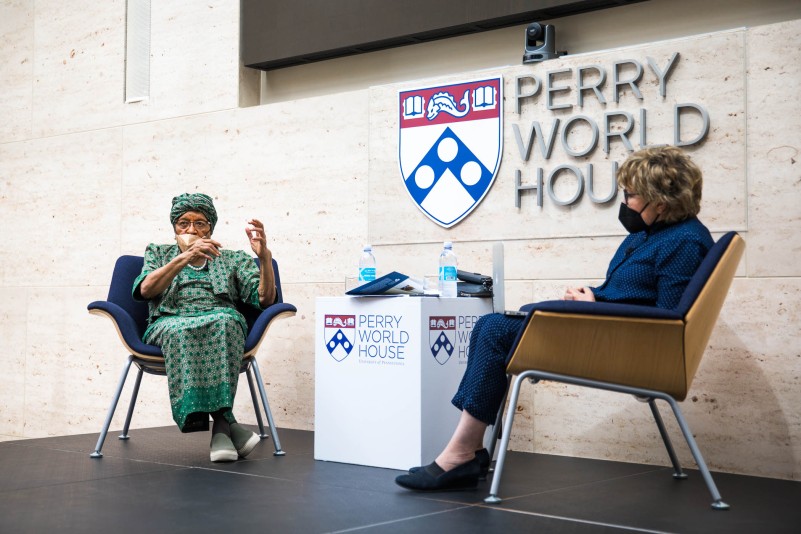 In its deadly sting, COVID reminds us that whatever we do, whoever we are in this world, we are connected, we have an entwined chain of global existence.
Ellen Johnson Sirleaf, former President of Liberia
Tuesday, September 28
Keynote Conversation with Ben Rhodes

After introductions from Interim Provost Beth Winkelstein, Rhodes addressed some of the biggest issues facing the world today, which he outlined in his new book, After the Fall: Being American in the World We’ve Made, including the global challenge of authoritarianism and anti-democratic forces.

Rhodes also shared his views on probabilistic forecasting, on the role of South Asia in U.S. foreign policy, and on what advice he would give to young people interested in entering public service. Moreover, his remarks addressed the role of America in the world, the fleeting post-Cold War moment of American hegemony, and the importance of integrating foreign and domestic policies and stewarding American democracy through the challenges it faces from within and without.

Toward the end of the event, responding to a student question about career advice, Rhodes said, “What I’d say to people, particularly young people like you, I meet too many people who think they have to build this resume with these internships and this credential and that. You will be better at what you do if you admire who you work for or are passionate about the issue you work on.” 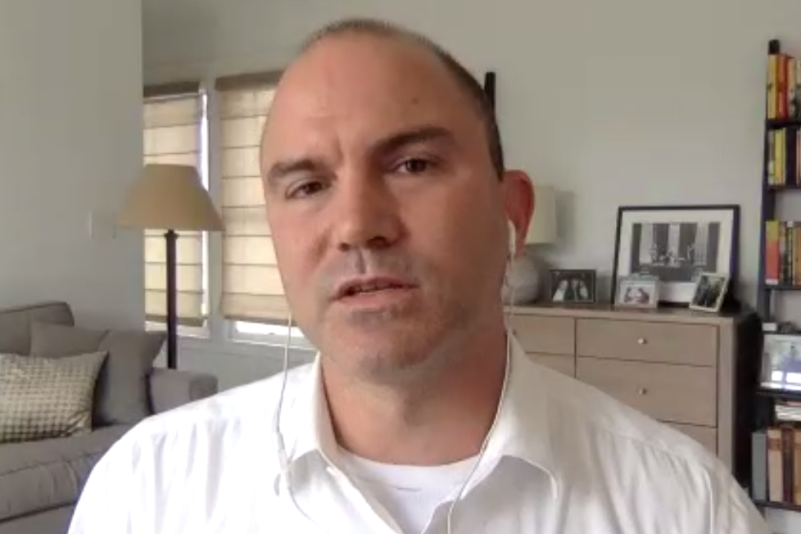 What I felt very aware of the whole time I was in government is ... the American moment of hegemony had already crested before Obama came into office ... it's kind of inevitable that other countries challenge American dominance. And Russia and China were already beginning to do that.
Ben Rhodes, former U.S. Deputy National Security Advisor

The 2021 Global Order Colloquium was made possible by the generous support of Carnegie Corporation of New York; The Elliott and Harriet Goldstein Private Foundation and Jesse Friedlander; and Paritosh V. Thakore (W’86) and Hemal Mirani (G’97, WG’97).