The 2022 Global Shifts Colloquium, "Islands on the Climate Front Line: Risk and Resilience," investigated the climate crisis through the lens of Small Island Developing States (SIDS). Click here to read the report and thought pieces from the colloquium.

It asked what policymakers should learn from SIDS, which are among the countries most vulnerable to and affected by the worst impacts of global warming and are therefore at the leading edge of global mitigation and adaptation policymaking. The colloquium provided a platform where world leaders, academics, policymakers, and practitioners openly discussed the origins and future of climate vulnerability in small islands, as well as policies to build climate change resilience.

With global warming on course to surpass 1.5°C by the end of the decade, colloquium participants emphasized the urgency of rapid and effective action on climate change particularly as it related to SIDS. To chart a course forward, this convening brought together representatives from Antigua and Barbuda, the Dominican Republic, Fiji, Haiti, Jamaica, Kiribati, Maldives, the Marshall Islands, and Trinidad to learn and strategize with academics, practitioners, and policymakers from institutions like the UN Framework Convention on Climate Change, the UN Office for the Coordination of Humanitarian Affairs, the Caribbean Natural Resources Institute, and the Alliance of Small Island States (AOSIS). 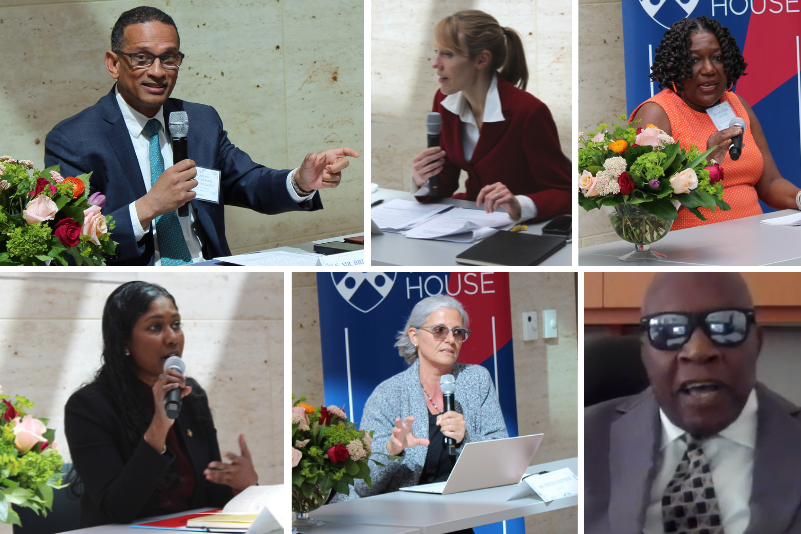 Former President of Kiribati, Anote Tong, opened the colloquium by outlining what was at stake for low-lying island nations and what shifts were needed – both in his home country and globally – to address the climate crisis.

Following the President’s keynote address, the colloquium opened with a panel on the historical roots of social, economic, and environmental vulnerabilities in the islands. Panelists discussed the intersections of colonialism, environmental justice, and climate change. They concluded that, for islands to have a chance at climate change adaptation, enduring environmentally and socio-economically destructive legacies of colonialism need to be tackled by the international community.

The colloquium then looked to the future. Panelists discussed how islands might prepare for the worst impacts of climate change, yet to come. They focused on worsening storm surges and sea-level rise, which will likely result in the loss of intangible things - like community, language, culture, and land – that bind both communities and countries. The resulting conversation anchored evolving policy concepts like such “loss and damage” in a very real depiction of the climate threat and what urgently needs to be done to combat it.

During lunch, Vice President of the Dominican Republic Raquel Peña de Antuña shared a prerecorded message for colloquium participants. She recounted the Dominican Republic’s struggle with the pandemic, highlighting the vulnerability of SIDS to external shocks. She called on participants to address the climate threat to small islands. Click here to watch her full message.

Participants discussed what was needed to improve resilience in urban centers as well as across the natural resources sectors of biodiversity, energy, and a green economy. As Latin America and the Caribbean are highly urbanized regions of the world, participants debated how growing population centers could adapt to a warming climate as well as demographic stressors. They laid out policy ideas for urban areas such as addressing disaster risks around informal settlements. Participants emphasized the importance of pursuing policies that put citizens, especially youth, at the center of urban planning and management.

In the arena of a green economy, biodiversity conservation, and energy, panelists discussed the need for improved data and the role of local action in climate-proofing island systems.

The Dominican Republic is among the most vulnerable countries to the adverse effects of climate change. We hope that the conversations at this event focus on the challenges, but also on our islands’ perspectives on a sustainable and resilient future.
Raquel Peña de Antuña, Vice President of the Dominican Republic 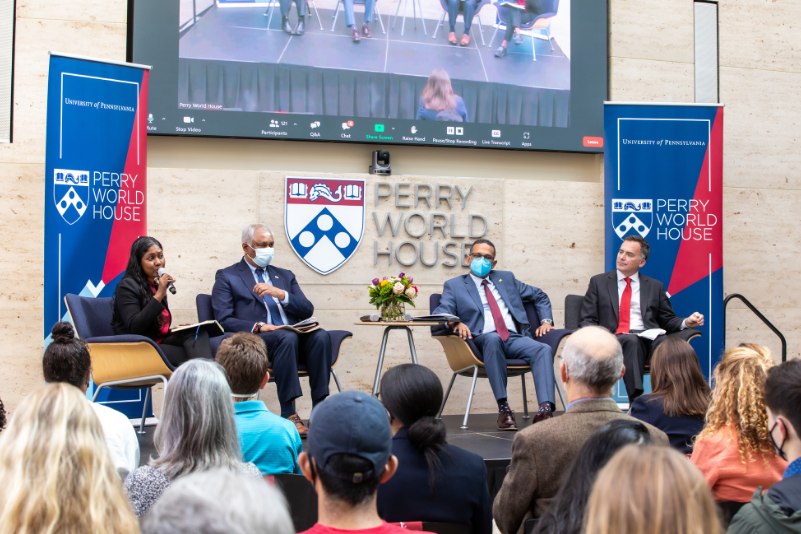 Photo by Eddy Marenco
Thursday, April 21, 2022
Imagining a Resilient Future with Island Ambassadors to the UN

The first public event of the colloquium brought together the Ambassadors to the UN of Antigua and Barbuda, Fiji, Jamaica, and Maldives to give an on-the-ground perspective on the climate crisis. Three Ambassadors who spoke - Thilmeeza Hussain, Satyendra Prasad, and Walton A. Webson - are also members of the Bureau of AOSIS, leading its efforts to advocate for small island states and influence international environmental policy.

The ambassadors described the dire situation facing their countries – stressing that they have been sounding the alarm about rising seas and devastating weather events for decades. They discussed how the international community can better protect island nations from the severe climate challenges they face, and outlined some initiatives students could take to help, starting with awareness building.

We have artificial boundaries that separate us, but at the end of the day this planet is home to all of us...Climate change is not a small island, developing-state problem; it’s a global problem. Global problems require global solutions.
Brian Christopher Manley Wallace, Permanent Representative of Jamaica to the United Nations 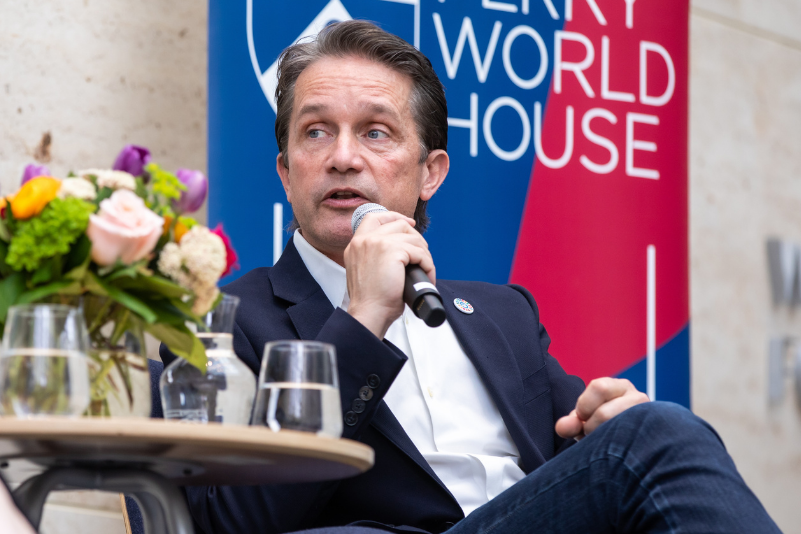 This conversation looked at how climate change is devastating the oceans, a vital resource for food security, livelihoods, and even the air we breathe. Cousteau discussed international efforts to gather more data about our oceans and unlock their potential for human advancement, from thermal energy to new sources of nutrition. Despite being Earth’s largest ecosystem – covering 70% of its surface – oceans remain largely unexplored. Protecting them, Cousteau explained, will mean understanding them far better.

It’s up to us to decide if we still want to be here. I believe in human beings and that we can make a difference, but it’s up to all of us, and we have a lot of decisions to make.
Fabien Cousteau, Deep Ocean Explorer and Filmmaker 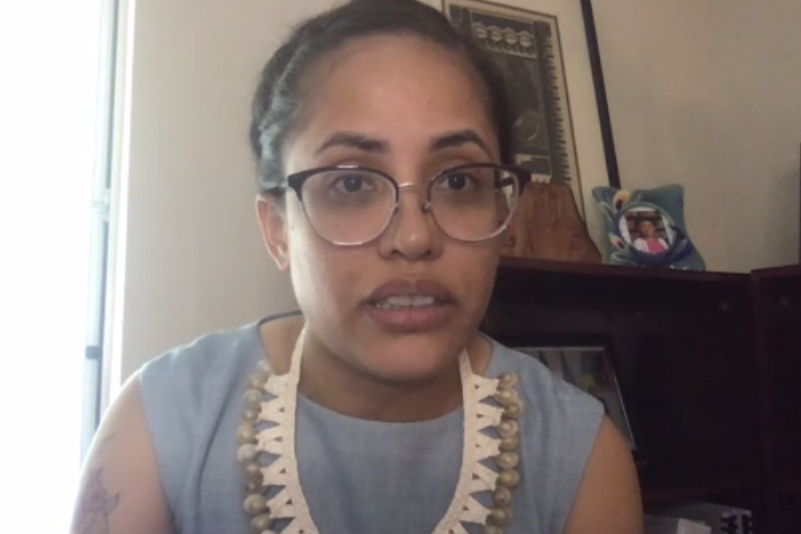 Thursday, April 21, 2022
The Art of Climate Resilience with Kathy Jetn̄il-Kijiner

The colloquium closed with an event featuring acclaimed Marshallese activist, artist, and educator, Kathy Jetn̄il-Kijiner, in conversation with author and activist Bill McKibben.

The pair discussed the history of the Marshall Islands, and the resilience of its people in the face of U.S. atomic bomb detonations following World War II, and now, the existential threat of sea level rise. A globally renowned poet, activist, and educator, Jetn̄il-Kijiner first rose to fame when she opened the 2014 UN Climate Summit in New York. At this event, she performed one of her poems, "Nice Voice," and discussed her transition from artist to climate envoy and COP summit negotiator for the Marshall Islands.

It’s like we’re building a boat as it’s sinking…We’re losing parts of our islands already. It constantly feels like we are just trying to keep up.
Kathy Jetn̄il-Kijiner, Poet and Climate Envoy