A Perry World House Colloquium: October 5-7, 2020 The UN at 75: Coronavirus and Competition

In recognition of the 75th anniversary of the United Nations, Perry World House convened its annual Global Order Colloquium, “The UN at 75: Coronavirus and Competition”, on October 5-7, 2020.

Over the course of three days, we convened leaders from across the world in high-level virtual conversations to discuss the UN at 75 and the future of global governance in an age of great power competition and at a moment of global crisis. Specifically, the colloquium sought to answer three questions of global policy:

We held keynote conversations to explore these questions in depth, including Dr. Mark Suzman, CEO of the Bill and Melinda Gates Foundation, one of the largest donors to the World Health Organization and a key player in the race for a COVID-19 vaccine; Ambassador Samantha Power, the former U.S. Ambassador to the UN; Dr. Gro Harlem Brundtland, the former WHO Director-General and Prime Minister of Norway; and a panel of global leaders comprised of Baroness Catherine Ashton, Ambassador Irina Bokova, and Ambassador Arun Singh.

In addition to the public panels, Perry World House convened closed-door expert discussions on the future of the UN, with workshop panels focusing on international security, human rights, global health, and UN reform. These workshops bridged the gap between academia and policy and brought together experts from across the world — including Singapore, South Africa, the Netherlands, Germany, and the UK — to discuss the most pressing issues facing the UN at this moment of crisis. These lively discussions, along with written pieces from the participants, which will be published soon, helped push forward a new research agenda on the future of global governance.

The closed door workshop took place on Zoom on October 5 and 6. To open the discussions, a panel on international security discussed the future of one of the most important principles enshrined in the UN charter: “To save succeeding generations from the scourge of war.”

The discussion, which included high-ranking policymakers with UN experience as well as top scholarly experts on international security touched on various reforms of the UN Security Council, how peacekeeping may need to rely on increased intelligence during the pandemic, and on the challenges facing the world in the future, such as including emerging threats from cyberspace and climate change on the Council’s agenda.

The second session, on human rights, again touched on a pillar of the UN charter, “to reaffirm faith in fundamental human rights, in the dignity and worth of the human person, in the equal rights of men and women and of nations large and small.” The group discussed both the perceived politicization of some human rights mechanisms — and the blind eye often turned to the violations of “nations large” — as well as the unchanging importance of the United Nations in promoting human rights all across the world.

On the second day, a panel of experts discussed the topic of UN reform, broadly defined. The panel discussed the biggest factors preventing such reform and how UN agencies can better respond to fast-moving global crises like COVID-19. Some panelists argued that important parts of “reform” depended on public perceptions and politics. In other words, the UN needs to work on its image as a dry dysfunctional talking shop, and scholars and policymakers alike need to appreciate the intricacies of how things get done within the UN’s labyrinthine bureaucracy.

The final panel of the closed door workshop focused on the topic at the top of everyone’s mind: global public health and the World Health Organization. How should the WHO be reformed, or could it be replaced? How can the UN and its member states help to promote a swift and equitable distribution of an eventual COVID-19 vaccine? Although there is an important role for private industry and public-private partnerships, participants agreed that the WHO ultimately relies on the buy-in of member states, and proposed concrete policy solutions for global health reform, which will be outlined in an upcoming report. 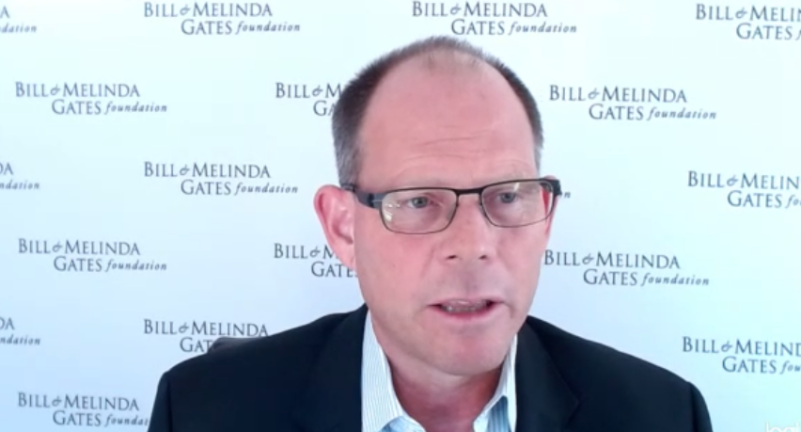 On Monday, October 5, Dr. Mark Suzman, the CEO of the Bill and Melinda Gates Foundation, engaged in a lively discussion with the New York Times’ Helene Cooper on global public health governance, COVID-19, and what the Gates Foundation is doing to combat the spread of the coronavirus pandemic.

The knock-on effects of COVID-19, Suzman explained, have already wiped out decades of public health improvements and severe poverty reduction. “In 25 weeks,” said Suzman, “we’ve reversed 25 years of progress.” All hope is not lost. Moderator Helene Cooper detailed her own experiences in a COVID vaccine trial, and Suzman described the Gates Foundation’s efforts with top scientists and global governance organizations to make the rollout of an eventual vaccine as effective as possible.

"Regular vaccination rates - and this is before we have a COVID-19 vaccine - have gone back to levels that we haven't seen for 25 years. In 25 weeks, we’ve reversed 25 years of progress.”
Dr. Mark Suzman, CEO, Bill & Melinda Gates Foundation 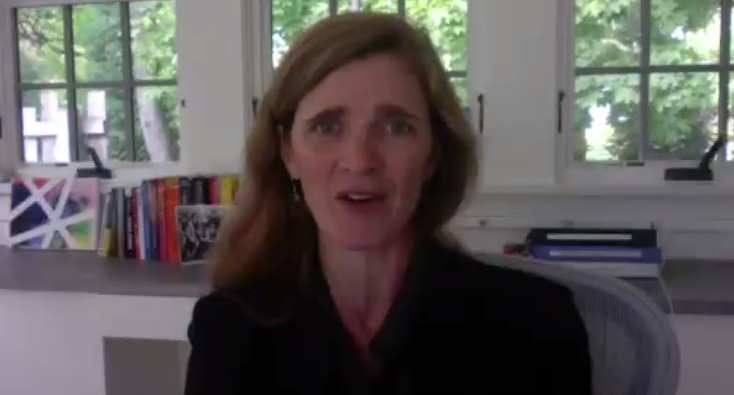 On Tuesday, October 6, Ambassador Samantha Power, the former U.S. Ambassador to the UN, engaged in a wide-ranging conversation on the future of the UN with Vivian Salama of CNN.

Power and Salama’s conversation included a discussion of the feasibility of UN veto reform, as well as advice to young women interested in diplomatic service. In addition to the future of the UN and US engagement with it, Power and Salama discussed current affairs and the Azerbaijan-Armenia conflict, including the lack of US leadership on defusing the tension in the region. On the gravity of the situation, Ambassador Power explained, “This is a grave threat to human life. Lives are being lost, time is being lost.”

In the end, Power explained, US reengagement with the international order has to begin at home. On the subject of rejoining the Paris Climate Accords, the Ambassador said, “I think the only way to talk about a restoration of U.S. leadership is to start at home. Returning to the Paris Agreement, for instance, is symbolic until we have domestic rules for clean power.”

"The only way to talk about a restoration of U.S. leadership is to start at home. Returning to the Paris Agreement, for instance, is symbolic until we have domestic rules for clean power.”
Ambassador Samantha Power, former U.S. Ambassador to the UN 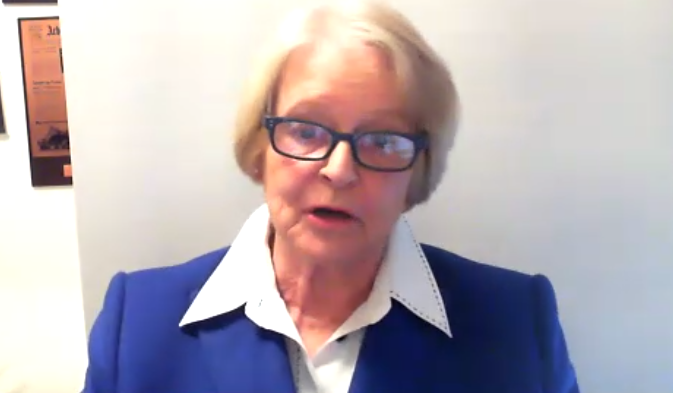 On the third day of the colloquium, Dr. Gro Harlem Brundtland, former Norwegian Prime Minister and former Director-General of the WHO, joined from Norway for a discussion of this critical moment for international cooperation with NPR’s Deborah Amos.

In her remarks, Brundtland called for a “New Bretton Woods moment,” and argued that renewed multilateralism will be the key to building back better after the pandemic. The coronavirus, Dr. Brundtland explained, has not affected all people equally. Rather, “the death toll and economic impact of the pandemic has fallen disproportionately on poor, vulnerable and marginalized communities within societies, deepening the chasms of inequality and social injustice.”

As it has exacerbated the fissures in international society, the virus has also thrown into relief the need for renewed commitments to international cooperation, Dr. Brundtland argued. This need goes beyond COVID-19, and multilateralism “is the only way to effectively tackle the key global challenges we face, particularly the serious existential threats posed by climate change and nuclear weapons.”

"The death toll and economic impact of the pandemic has fallen disproportionately on poor, vulnerable and marginalized communities within societies, deepening the chasms of inequality and social injustice.”
Dr. Gro Harlem Brundtland, former Director-General of WHO

Wednesday, October 7, 2020
Global Leaders on the Future of the UN

For the final panel of the colloquium, Perry World House convened a truly global set of leaders, including Baroness Catherine Ashton, the former High Representative of the European Union for Foreign Affairs and Security Policy; Ambassador Irina Bokova, the former Director-General of UNESCO; and Ambassador Arun Singh, a distinguished Indian diplomat who has served at the UN and as ambassador to the United States, Israel, and France. Trudy Rubin, the worldview columnist at the Philadelphia Inquirer and a Perry World House Visiting Fellow, moderated the conversation.

Tasked with discussing the future of the UN at this moment of crisis, the panel brought their diverse international perspectives to bear on some of the most pressing global issues. Once again, in the words of Irina Bokova, “The COVID crisis has woken us to review an ailing global order, and it's shown us that multilateralism is the way out.” Ambassador Singh added that “UN reform” must start with UN member states: “The UN is made up of member states. If it's not working well, it's because member states are not collaborating.” Baroness Ashton, however, added from her experience working with the P5 on the Iran Deal, that despite competition between great power, cooperation is possible, even on the most difficult problems the world is likely to face in the next 75 years.

“The COVID crisis has woken us to review an ailing global order, and it's shown us that multilateralism is the way out.”
Ambassador Irina Bokova, former Director-General, UNESCO

THE 2020 GLOBAL ORDER COLLOQUIUM WAS MADE POSSIBLE IN PART BY THE GENEROUS SUPPORT OF CARNEGIE CORPORATION OF NEW YORK; THE ELLIOTT AND HARRIET GOLDSTEIN PRIVATE FOUNDATION AND JESSE FRIEDLANDER; AND PARITOSH V. THAKORE (W’86) AND HEMAL MIRANI (G’97, WG’97).