On September 24-25, 2018, a who’s who of former government officials, diplomats, and journalists joined academic experts at the University of Pennsylvania’s Perry World House for a two-day colloquium focused on “Competing Visions of the Global Order.” The first day of the colloquium featured leading scholars presenting cutting-edge research, with commentary from policymakers with recent government experience. The second day of the colloquium, a public forum, involved four high level discussions about the global order and geopolitics, including the second Penn Biden Leaders Dialogue, featuring Joseph Biden, the 47th Vice President of the United States and Benjamin Franklin Presidential Practice Professor at Penn, in conversation with former U.K. Deputy Prime Minister Nick Clegg.

On the first day of the colloquium, scholars and policy experts convened to exchange views on how the global order is faring at a time of dramatic change and turbulence. With the support of Carnegie Corporation of New York, the colloquium aimed to bridge the gap between academia and the policy world by empowering experts to foster mutual understanding on divisive questions at the intersection of international security, political economy, international law, and global culture. Symposium participants dissected the influence of national interests and proposed interdisciplinary pathways for cooperation in the management and evolution of the great power competition. Participants included academics such as Nina Pavcnik, a Professor of Economics at Dartmouth College, and policymakers such as Nadia Schadlow, a Distinguished Visiting Fellow at Perry World House and the former Deputy National Security Adviser for Strategy.

Taken together, each of the first day’s panels generated conversations that at times were pessimistic as well as optimistic, focused on regional and then global matters, and focused on private and public solutions. The first panel discussed the latest research on shifts in the international security environment, particularly regional balances of power. The second panel probed the fragility of the economic order as the United States becomes less willing to bear the burden of an open international system. The third panel examined whether the international legal regime can continue to provide a stable basis for addressing human rights violations and generate a stable framework for diplomatic and economic interactions, and the last panel considered how global culture is changing to reflect not just new voices, but also changing national power dynamics.

Deborah Amos, an international correspondent with National Public Radio, led a conversation with Lady Cathy Ashton, former High Representative of the European Union for Foreign Affairs and Security Policy; Felipe Calderon, Distinguished Visiting Fellow at Perry World House and former president of Mexico; Aaron Friedberg, Professor of Politics and International Affairs at Princeton University; and Richard Verma, former U.S. Ambassador to India.  Participants considered the sources of rising populist sentiment in the West. Ashton, who was previously a Visiting Fellow at Perry World House, noted that many people in Britain and around Europe have genuine concerns about their economic future but for populist politicians “blaming the outsider is often a useful tool.” All of the participants recognized the role of polarization in fostering confusion about America’s place in the global order. 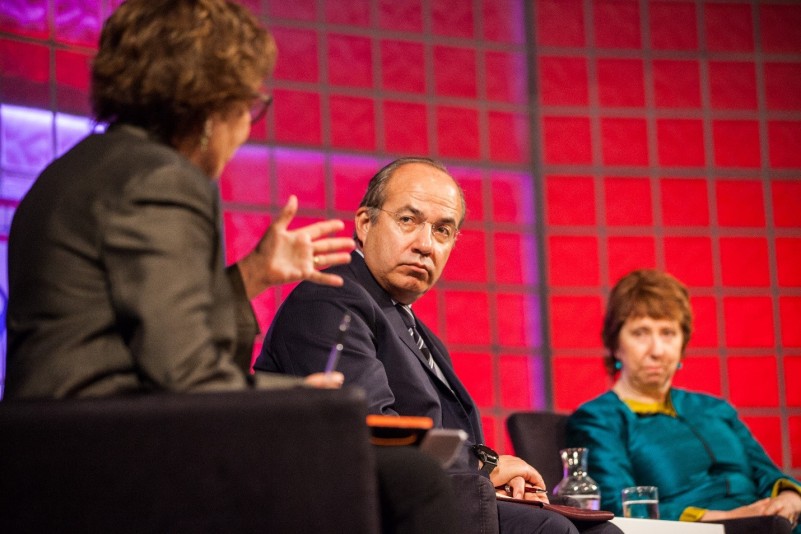 Former Mexican President Felipe Calderon, Perry World House Inaugural Global Leader-in-Residence, said of the colloquium, “We are seriously thinking about the future of the global order with leading thinkers and policy makers from the U.S. and the world.”

Ambassador Susan Rice, who served as the National Security Adviser to President Obama, and is a Distinguished Visiting Fellow at Perry World House this year, participated in a rich conversation about the future of the world order with Ed Luce, the Washington columnist and commentator for the Financial Times. “There are many who say America is in decline; I don’t agree with that,” she declared. The former U.S. Ambassador to the United Nations also defended the American commitment to multilateralism as the best counterbalance to China’s influence. “Our strength in Asia has, for decades, been a function substantially of our alliance relationships,” Rice said, “and we have put our alliance relationships in Asia under enormous strain.” In the wake of U.S. President Donald Trump’s election and subsequent decisions, including exiting the Trans-Pacific Partnership trade pact, she contended rebuilding relationships in Asia and elsewhere will not be easy. “We can’t expect that everything will snap back to status quo ante,” she warned. 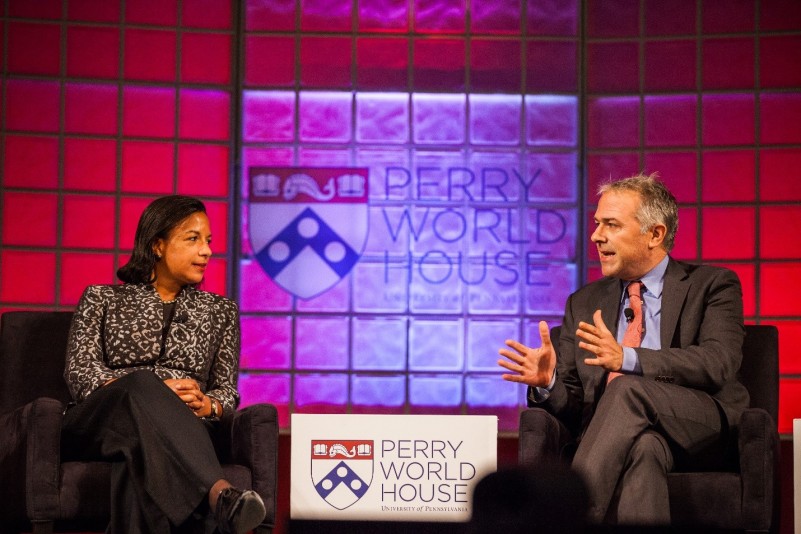 After her conversation with Ed Luce, columnist for the Financial Times, Susan Rice, 25th National Security Advisor and Distinguished Visiting Fellow at Perry World House, said, “I was impressed by the quality of the student questions and the diversity of the kids who asked the questions — it was striking to me.”

During an interview with journalist Lara Logan, H.R. McMaster, former National Security Adviser to President Trump and a Distinguished Visiting Fellow at Perry World House, offered a strategic explanation of the 45th president’s foreign policy that emphasizes the centrality of great power competition. “All of us took a holiday from history after the Cold War,” he argued, “while forgetting some of the things that prevented great power conflict for more than 70 years.” This approach led President Trump to withdraw from the Iran nuclear deal, which McMaster argued was based on a false assumption that reopening Iran to the international economy would result in a moderation of its behavior. Multilateralism, McMaster explained, has a role in the President’s foreign policy, but only when the positive outcomes for American interests are clear. 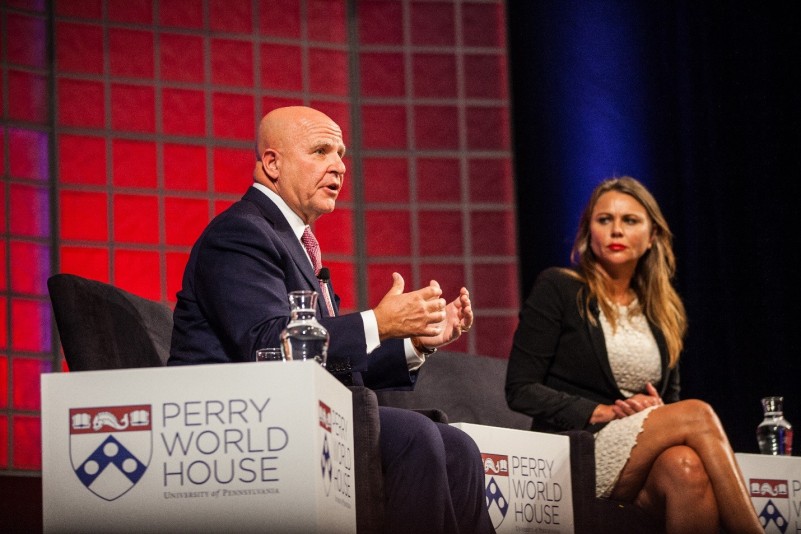 In conversation with CBS’s Lara Logan, Lieutenant General H.R. McMaster (Ret.), a Distinguished Visiting Fellow at Perry World House and former National Security Advisor, said, "There was a panel discussion yesterday at Perry World House and if you get access to those papers, some tremendous academics have great research in this area that places the current debate in historical context as well."

Biden and Clegg had an engaging conversation with the University of Pennsylvania community. Together, the two leaders reflected on the need for politicians to listen to the voices of their constituents, particularly the next generation of voters. Alluding to the United Kingdom’s decision to leave the European Union, or “Brexit,” Clegg warned, “We are unwittingly dismantling our capacity to act collectively. The repair process begins at home. All politics is local, and we need to return to the all the local and domestic issues.” He added, “The loss of faith in our multinational system starts at home.” His own experience in coalition government taught him that “the politics of compromise is very difficult to import into countries where the culture is winner-take-all.” 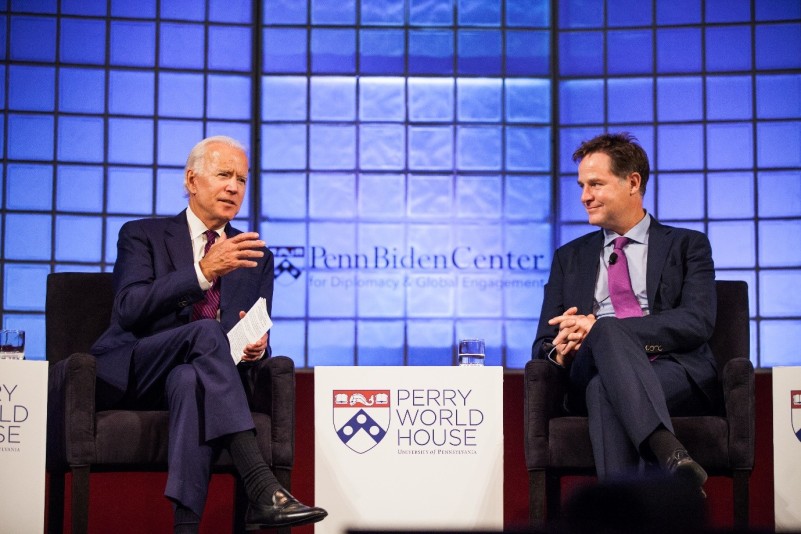 “One of the things we are trying to do here at Penn is trying to amend that world order in ways that are able to bring back confidence in the average person in the need for collective action,” said Joe Biden, the 47th Vice President of the United States and Benjamin Franklin Presidential Practice Professor, discussing Penn’s role in global affairs.

Philadelphia Inquirer: A UPenn Conference Shows Where Democratic and GOP Visions of Global Order Could Meet

On the first day of the 2018 Global Order Colloquium, scholars and policy experts convened to exchange views on how the global order is faring at a time of dramatic change and turbulence. Click the link below to read the thought pieces developed by the participants, following these conversations.