Experts from around the world met over four days to examine the underlying challenges, debates, and global policy solutions to prepare for and respond to climate-induced human displacement. Click here to read the report and thought pieces from the Colloquium.

While much has changed in the world since March 2020, when we originally scheduled this event, the complex and interrelated issues related to climate change and climate-induced displacement remain as urgent as ever. We reimagined and strengthened the colloquium by expanding the participation by experts from around the world, who Zoomed in from a dozen countries and nearly every continent. Though we were unable to gather in person in our World Forum in Philadelphia, the conversations and work were insightful and robust.

We also convened a workshop for academic researchers and policymakers. These expert discussions unraveled key debates, challenges, and issues around how climate change may affect human migration; what adaptation measures are needed; and how to develop and promote these urgent adaptation reforms. The discussions focused on which data and modeling techniques may be useful; what legal protection regimes currently apply and how they might change to navigate these shifts; what the security implications of both climate change and climate-induced displacement might be, at the individual and state levels; and how to support frontline communities facing the most immediate effects of climate change and climate-induced displacement. 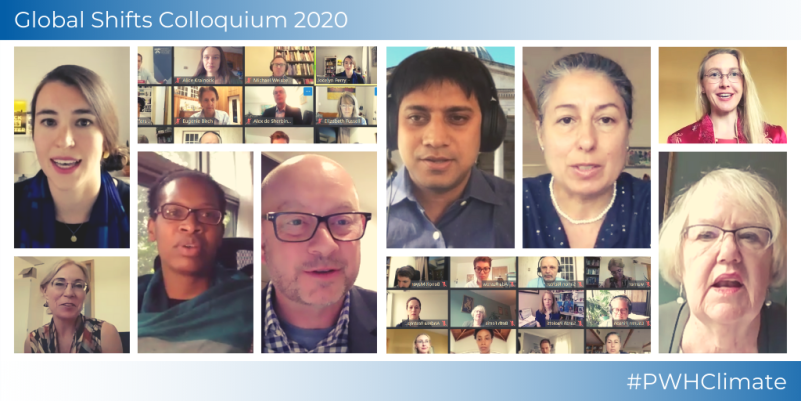 Scholars from a variety of disciplines and policymakers from various levels of governance and types of organization joined for wide-ranging discussions on the manifold causes and consequences of climate change for human movement.

The workshop opened with framing remarks on the conceptual and definitional challenges inherent to climate-induced displacement. Beth Ferris from Georgetown University, Pablo Escribano of the International Organization for Migration, and Koko Warner of UN Climate Change untangled the definitional difficulties and consequences of denoting a category of “climate migrants” at all, from both legal and institutional vantage points. Given the multi-causal nature of most migration, climate change is unlikely to be the sole, or even primary, factor. One of the workshop’s principal aims was to foster smart dialogue about the intersection of these causes with an interdisciplinary group of experts, to address environmental, geographic, demographic, legal, economic, political, social, cultural and other challenges faced by “migrants who move in part because of the effects of climate change,” as Ferris referred to them (acknowledging that, while accurate, the phrase does not exactly roll off the tongue).

The next session examined the utility of data and modeling practices in decision-making around climate-induced migration, and the challenges and complexity in differentiating climate-induced displacement from other forms of forced migration. Panelists, including the Internal Displacement Monitoring Centre’s Justin Ginnetti, underscored the complicated nature of compiling data and clearly identifying causal links and global patterns in very local processes.

The third panel reviewed international legal regimes and pathways for migration, and how concepts of asylum and notions of borders, sovereignty, and citizenship may change due to climate change and climate-induced displacement. There was a robust debate on the utility of terms like “climate refugees” or “climate migrants” to trigger greater legal protections, and the fear that re-opening the 1951 Convention Relating to the Status of Refugees might lead to even more limited asylum protections given the current global political climate.

This was followed by a session on the security implications of climate-induced displacement, including the devastating impact of disasters, uncertainty, and scarcer resources on human security, peace and conflict, and national security. Several participants cautioned against a security-framing of climate-induced migration due to concerns that alarmism in the public discourse would limit future migrants’ access and support. However, Russell Miles, of the Australian Department of Foreign Affairs and Trade and UN Climate Change’s Task Force on Displacement, argued that incorporating security issues into the narrative around climate change increases engagement and may be useful to encourage public opinion toward more effectively and consistently responding to climate change.

Meanwhile, there are no simple problems or solutions in this field, as Cullen Hendrix from the University of Denver highlighted: “Climate change is not a wolf at the door, waiting to blow the house down, it’s more thousands or millions of termites chewing away at the foundation.”

The workshop’s final day discussed adaptation and resilience in frontline communities, institutions, and systems, including how resilience might be conceptualized or defined. Participants reflected on next steps to identify critical research priorities and policy changes to ground discussion about resilience and adaptation in the needs of frontline communities. Pep Bardouille, of the World Bank Group, and Musonda Mumba, of the UN Environment Programme, situated this larger conversation within the local contexts of the Caribbean and the Sahel, respectively, by elaborating on regional experiences and conceptions of mobility and the potential opportunities inherent to intra-regional efforts. Simon Richter, of Penn’s Department of Germanic Studies, reminded participants that we must be wary of normalizing the unprecedented disruption we are sure to face as a consequence of climate change.

“Climate change is not a wolf at the door, waiting to blow the house down, it’s more thousands or millions of termites chewing away at the foundation.”
Cullen Hendrix, University of Denver 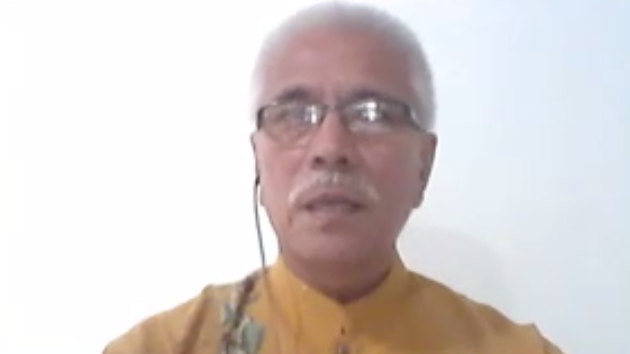 President Tong emphasized that climate change is the greatest moral challenge ever to face humanity. He discussed the pressures of trying to govern a country that climate change is already damaging through sea-level rise, which may be uninhabitable in just a few decades. He has floated unconventional solutions to protect his people, the i-Kiribati, ranging from raising or creating new islands to relocating all i-Kiribati to Fiji—where President Tong purchased land for this purpose, or at least as an investment, while he was in office.

He described planned migration with dignity as a two-way process: with responsibility not only for migrating populations but also for host countries.

“People would move, not as refugees but as people who are prepared. Because we know this is happening…. If and when they migrate, they would go to the communities that they go to as worthwhile citizens, not as second-class citizens.”
Anote Tong, former President of Kiribati 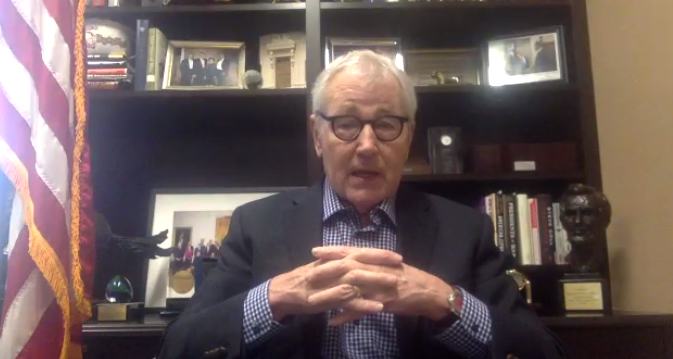 Hagel emphasized the imperative of addressing climate change because its consequences will degrade global stability. For already-fragile or volatile countries and regions, Secretary Hagel discussed how climate change is likely to exacerbate existing economic, political, and social stressors, and to have far-reaching security consequences.

The conversation ended with a call to fortify institutions and equip them with the tools to look ahead at impending climate crises, to create government capacity to focus attention specifically on climate change, and to allocate sufficient resources and finances to tackle the oncoming challenges.

“There’s nothing that you can do when a hurricane hits, or wildfires…. What you can do, though, is prepare. Try to get ahead of it, and do everything you can to minimize what causes these weather patterns, and the melting of the Arctic ice, and the changing of our temperatures: carbon emissions.”
The Honorable Chuck Hagel, former U.S. Secretary of Defense 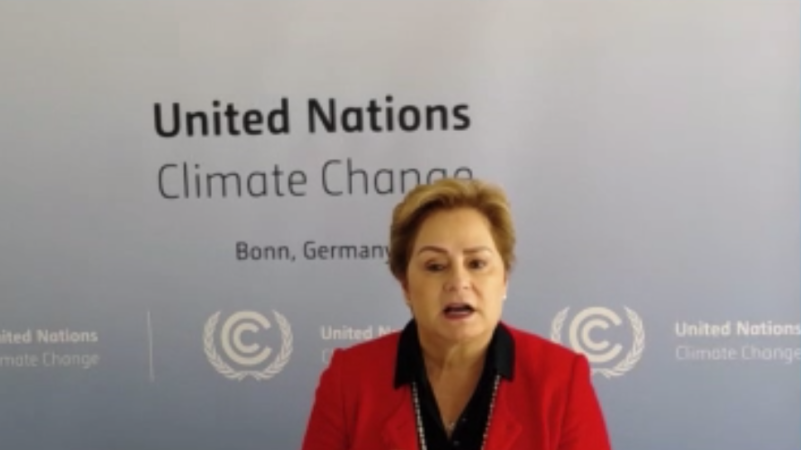 The last event of the 2020 Global Shifts Colloquium was an address by Patricia Espinosa, the Executive Secretary of the United Nations Framework Convention on Climate Change (UNFCCC), in discussion with Lisa Friedman of The New York Times.

Secretary Espinosa’s rousing speech reflected many of the themes of the colloquium—the balance between national sovereignty and the need for multilateralism in the fight against climate change, the learning and recovery opportunity that COVID-19 has presented the global community, and the heightened responsibility of wealthier countries in aiding more vulnerable countries or those with fewer resources.

"Boosting our ambitions relative to climate change and reduction in emissions; planning for a resilient future; and insuring a just and inclusive transition."
Patricia Espinosa's three ingredients to fully harness the power of the Paris Agreement 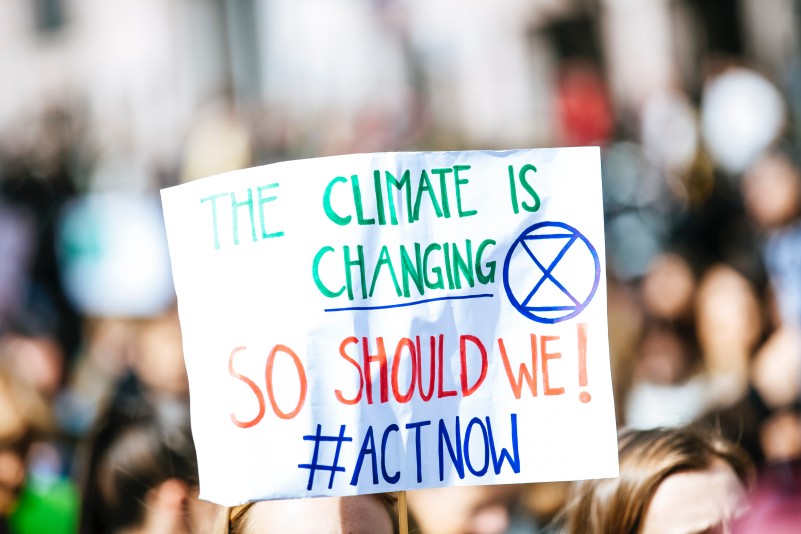 By the close of the colloquium, participants had identified numerous tensions and areas demanding institutional, political, and international attention to prepare for and prevent the effects of climate change on vulnerable populations.

These included individuals’ right to remain and inclusion in decision-making contrasted with societal need for relocation or technical and bureaucratic processes; the fair, equitable, and just allocation of resources and energy in normative and pragmatic terms; and the divergence between collective recognition by many individuals that climate change is an urgent problem juxtaposed with a near-total lack of action, or sufficient action, on the part of many national governments.

The colloquium left participants and Perry World House with crucial questions about our local and global responses to climate change and preparation for climate-induced displacement. What do we call this type of human displacement? How do we legislate around human mobility due to manifold, intersecting causes—of which climate change might be only one? How do we translate the strategies discussed and action deemed necessary into concrete policies for local and national governments? And how do we communicate with broader audiences and pressure the appropriate levers of power to bring these policies to fruition?